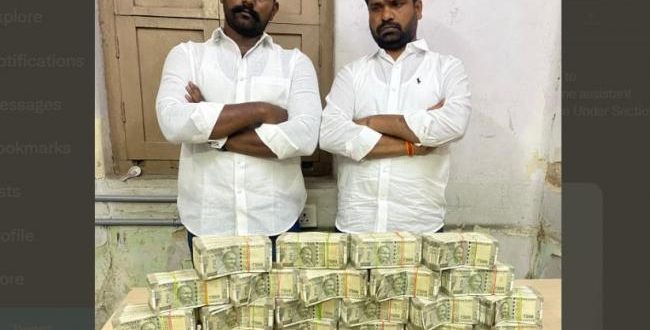 Hyderabad:Hyderabad police seized cash worth Rs 70 lakhs on Thursday and arrested two men in connection with the case. The two men who were arrested include an assistant professor previously associated with the Akhil Bharatiya Vidyarthi Parishad (ABVP).

The cash was discovered while police were conducting a routine vehicle check in Hyderabad’s Banjara Hills area.Officials stopped the car which passed the checkpoint in a suspicious manner and found two persons inside along with a bag containing a huge amount of currency notes.

Upon grilling them, they revealed themselves as 38-year-old Kishan Rao and 26-year-old Vemula Vamshi, both residents of Hyderabad. They didn’t give satisfactory answers as to why they were carrying the currency notes in the car and failed to produce proper documents.

Based on this, officials apprehended the men and found unaccounted cash worth Rs 70 lakhs.

One of the accused, Kishan Rao, said that he had collected the amount from a third person, identified as Madhu, who is currently absconding.

Both were arrested under Section 102 of the Code of Criminal Procedure (CrPC). Further investigations are underway in the case.