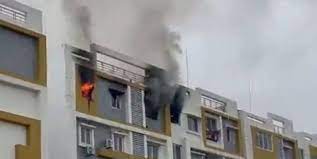 Hyderabad: Fire Breaks Out In Apartment At Rajendra Naga

HYDERABAD: Right after the Secunderabad Club fire news came out another fire broke out at a flat in an apartment in Hyderguda at Rajendarnagar in early on Sunday morning. No casualties were reported in the incident.

The fire broke out on the fifth floor of Ishta City apartment in Hyderguda in flat number 521 flat. Residents of the apartment who saw the fire immediately ran out and alerted the police and the fire station.

With the help of three fire tenders, firefighters doused the fire and contained the blaze. There was no loss of life, however, the furniture in the house was completely burnt.

According to officials, the occupants had gone for Sankranthi vacation after locking the flat. They suspect that a short circuit might have caused the fire accident. The flat owners were informed about the incident and a case was registered.