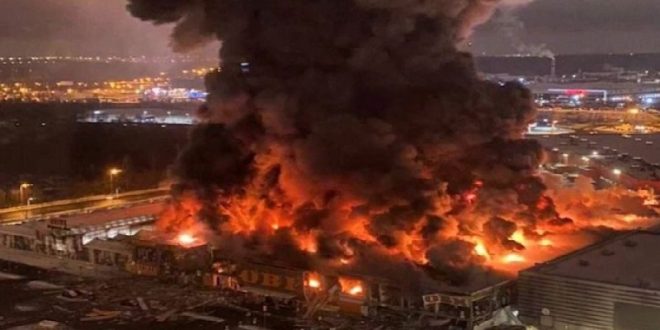 MOSCOW: Russian firefighters have put out a massive blaze that engulfed one of the largest shopping centres in a suburb of the capital, Moscow, leading to the collapse of part of the structure and one death. 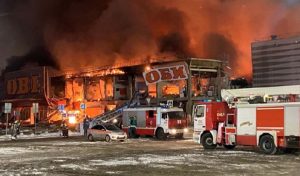 The fire early on Friday spread over an area of about 7,000 square metres (75,000 square feet) in the Mega Khimki shopping and entertainment centre, authorities said.

The head of the Russian emergencies ministry, Sergey Poletykin, reported that at least one person had been killed in the incident, with the fire put down at 10:45am (7:35 GMT).

More than 70 firefighters and 20 fire trucks had been sent to the site, emergency services said. The work was hampered due to the design of the building, which is located about 7km (4 miles) from Moscow’s Sheremetyevo Airport, they said.

“Due to the collapse of the roof, the fire spread instantly to a large area,” the Moscow region’s emergency services said on Telegram.

Russia’s Investigative Committee, which probes major crimes, said it was looking into the cause of the fire.

The head of the Moscow region’s emergency services agency said it appeared the blaze was the result of safety regulations being violated during repair work on the building. 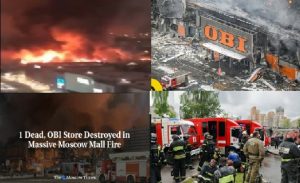 A worker told TASS a short circuit might have caused the fire, followed by an explosion that caused the flames to spread.

Russian news agencies had earlier reported that emergency services were considering “arson” as a possible cause.

Videos on social media showed a huge fire, with people fleeing the burning building into a parking lot.

Mega Khimki had been home to a large number of Western retail chains before the companies’ departure from Russia in the wake of the Ukraine war, including one of the first IKEA stores in the Moscow area.

Russia has seen a number of deadly fires at entertainment venues in recent years.

Last month, a fire killed 13 people at a bar in the city of Kostroma. A drunk man had reportedly fired a flare gun indoors but inadequate fire safety regulations caused the large number of deaths, authorities had said.

In 2009, another blaze at a nightclub in the Urals city of Perm killed 156 people. 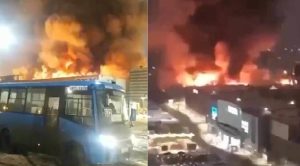 At least 64 people, including nine children, have been confirmed dead in fire at a shopping centre in the city of Kemerovo in Siberia, according to Russian emergency services cited by local media.

The death toll was expected to rise as the rescue operation continued on Monday at the Zimnyaya Vishnya (Winter Cherry) shopping centre, just hours after the fire engulfed the four-storey building, Russia’s Tass news agency reported.

“Two out of three cinema halls caved in from the fourth to the third floor of the building,” Vladlen Aksyonov, Russian deputy emergencies minister, told Tass.

A representative of the emergency operation headquarters told Tass that 10 out of 44 injured people were being treated in a hospital. Others received medical attention at the scene. (Int’l Monitoring Desk)