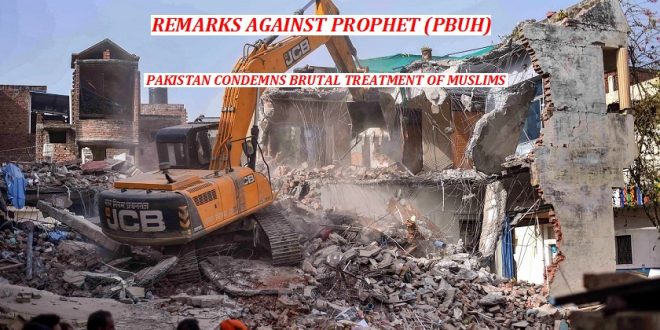 Homes of demonstrators protesting being demolished in India 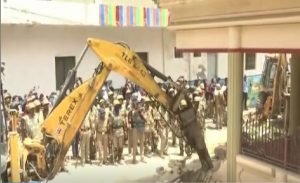 In Indian Illegally Occupied Jammu and Kashmir, police arrested a youth for posting a video threatening to behead the ruling party’s former spokeswoman who had made some of the remarks, officials said. The video, which was circulated on YouTube, has been withdrawn by authorities.

Muslims have taken to the streets across India in recent weeks to protest the anti-Islamic comments by two members of Prime Minister Narendra Modi’s Hindu nationalist Bharatiya Janata Party (BJP).

Clashes have broken out between Muslims and Hindus and, in some cases, between protesters and police in several areas. Police in Uttar Pradesh arrested more than 300 people in connection with the unrest. 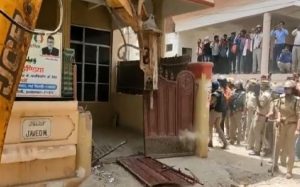 Some in India’s minority Muslim community see the comments as the latest instance of pressure and humiliation under BJP rule on issues ranging from freedom of worship to the wearing of hijab head scarves.

The BJP has suspended its spokeswoman, Nupur Sharma, and expelled another leader, Naveen Kumar Jindal, for the comments, which have also caused a diplomatic row with several Muslim countries.

Police have filed cases against the two, and the government has said the comments do not reflect its views.

Some hardline Hindu groups have demanded their arrest, while some Muslim groups have labelled them as brave and nationalist politicians.

Over the weekend, the chief minister of Uttar Pradesh state, Yogi Adityanath, ordered officials to demolish any illegal establishments and homes of people accused of involvement in riots there last week, the BJP’s state spokesperson said. 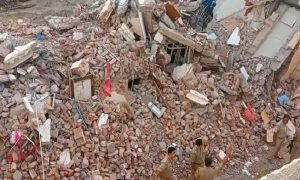 The house of an alleged mastermind of the riots, whose daughter is a female Muslim rights activist, was demolished amid a heavy police presence on Sunday. The properties of two more people accused of throwing stones after Friday prayers were also demolished in the state.

Mrityunjay Kumar, Adityanath’s media adviser, tweeted a photo of a bulldozer demolishing a building and said, “Unruly elements, remember, every Friday is followed by a Saturday.”

On Sunday, Jindal said his family faced continuous threats and some of his followers said a crude bomb was defused near his residence in the capital, New Delhi.

Indian Prime Minister Narendra Modi has so far not commented on the communal unrest.

In the eastern state of West Bengal, public gatherings are not allowed in the industrial district of Howrah until June 16. This is because of an emergency law. 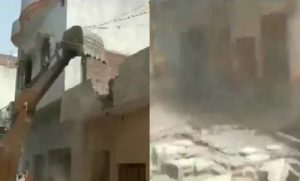 The BJP’s West Bengal president on Sunday staged a sit-in protest and accused neighboring Bangladesh, a mainly Muslim nation, of inciting violence in the state.

Last week, countries such as Qatar, Saudi Arabia, the UAE, Oman, and Iran-which are key trade partners of India-lodged diplomatic protests to demand an apology from Modi’s government for the comments.

Meanwhile, Pakistan on Saturday strongly condemned the heavy-handed treatment by the Indian authorities of Muslims who were registering a peaceful protest after Friday prayers over the derogatory remarks of the two members of the ruling political party BJP against Prophet Muhammad (PBUH).

“The indiscriminate and widespread use of brute force by the Indian authorities across various states in India has resulted in the killing of two innocent Muslim protesters and critically injured thirteen others in Ranchi city,” a statement issued by the Ministry of Foreign Affairs read.

It is worth mentioning that in Jharkand’s Ranchi, Indian police shot dead two protesters when they opened fire at the demonstrators protesting against a Bharatiya Janata Party (BJP) official’s blasphemous comment about Prophet Mohammed (PBUH). 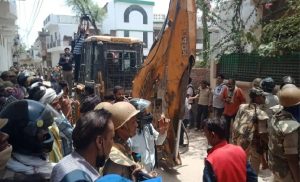 According to NDTV, the police had to fire and baton charge in order to contain the mob. More than 130 protestors were arrested as country-wide protests broke out in India following a BJP spokesperson’s blasphemous remarks about the Holy Prophet Muhammad (PBUH).

Muslims took to the streets after Friday prayers in huge numbers across India and neighboring countries to condemn the comments, with police firing on a crowd in the eastern city of Ranchi.

Terming the footage of Indian forces unabashedly opening fire on unarmed protesters in Ranchi city as “horrific”, the Foreign Office mentioned reported that in Uttar Pradesh alone a total of 227 people have been arrested so far.

“This is a new low in the Indian government’s repressive ‘Hindutva’ inspired majoritarian policy aimed at demonizing and persecuting minorities, especially Muslims,” the ministry said.

The Foreign Office reiterated that Pakistan denounces this shameful treatment of Indian Muslim citizens by the Indian government and expresses its solidarity with the Muslims of India in these testing times. 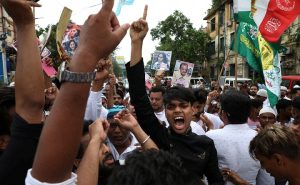 “It is alarming that despite the global condemnation of the BJP officials’ sacrilegious remarks, the Indian government’s reaction has been muted, while on the other hand the BJP-RSS regime has persisted in its Islamophobic actions and has shamefully chosen to handle public protest with brutal and indiscriminate use of force,” the ministry noted.

The office warned that the Indian Government’s apathy to the grievous situation and the vicious cycle of communal violence may lead to further marginalization of the Indian Muslims.

Reiterating Pakistan’s stance, the Foreign Office once again strongly urged India to ensure that demonstrable action is taken against those responsible for making derogatory remarks and attacking the dignity of the Holy Prophet Muhammad (PBUH).

“The international community must also take immediate cognizance of the grievously aggravating situation of Islamophobia in India. India must be held accountable for stifling the rights of the minorities, especially Muslims, and ensure that Muslims living in India are not victimized for practicing their faith and religious beliefs.