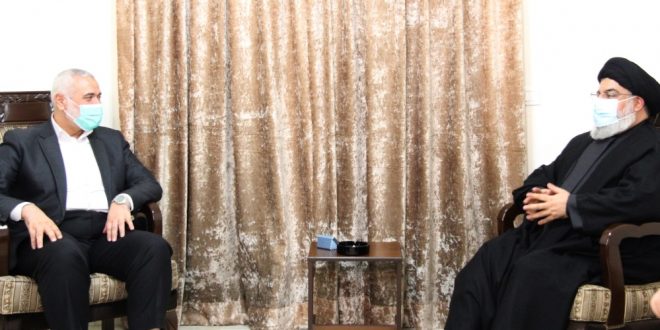 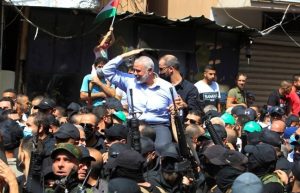 Hezbollah-run Al-Manar television reported earlier that Hassan Nasrallah, head of the Iran-backed Shia Hezbollah movement, and Haniya stressed the “stability” of the “axis of resistance” against Israel.

They discussed “political and military developments in Palestine, Lebanon and the region” and “the dangers to the Palestinian cause”, including “Arab plans for normalization” with Israel, Al-Manar said.

The meeting comes after an August 13 announcement that Israel and the United Arab Emirates (UAE) have agreed to normalize ties.

While the United States-backed diplomatic drive aims to boost a regional alliance against Iran, Palestinians have condemned it as a “stab in the back” as they remain under occupation and do not have their own state. 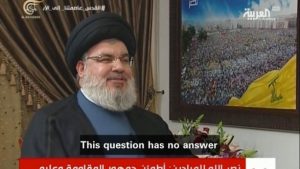 Israeli Prime Minister Benjamin Netanyahu has said his country is in talks with other Arab and Muslim leaders now about normalising relations, following the deals with the UAE and, decades ago, Egypt and Jordan.

Haniya arrived in Lebanon on Wednesday, on his first visit to the country in nearly 30 years, for direct and video-conference talks with other Palestinian groups that oppose Israel’s diplomatic initiative.

Haniya, who heads the political bureau of Hamas, the movement that controls the Gaza Strip, arrived in Ain al-Helweh under the protection of Hamas members and camp guards.

Before a cheering crowd of hundreds in Ain al-Helweh, near the southern coastal city of Sidon, including refugees who travelled to see him from other camps, Haniya praised his movement’s military capacity and shrugged off the UAE-Israel normalization deal.

“Not long ago, our rockets only reached [targets] metres from Gaza’s borders. Today, the resistance in Gaza 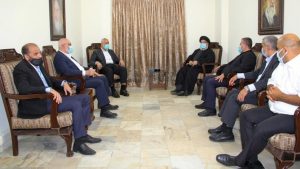 possesses rockets that can reach Tel Aviv and beyond Tel Aviv,” he said.

As for normalization between Israel and Arab countries, that “does not represent the people, neither their conscience, nor their history nor their heritage”, Haniya said, quoted in a Hamas statement.

Israel’s military has in recent weeks targeted Hamas in the Gaza Strip and what it says have been Hezbollah gunmen along its northern border with Lebanon.

It also regularly launches air attacks in war-torn Syria against what it says are Hezbollah and other pro-Iranian fighters fighting on the side of President Bashar al-Assad’s regime.

Nasrallah has been living in secret locations since Hezbollah’s devastating 2006 war with Israel and only makes rare public appearances. He said in 2014 that he often changes his place of residence. (Int’l News Desk)