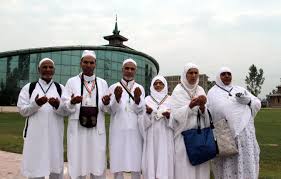 Haj Quota for Telangana Fixed at 4,169

They  said in a press release  that 484 Haj Applicants under Reserved Category of 70+ years would be selected automatically without draw of lots, while draw of lots (Qurrah) would be held shortly for the remaining 3685 seats from among 12,884 applicants under fresh category.