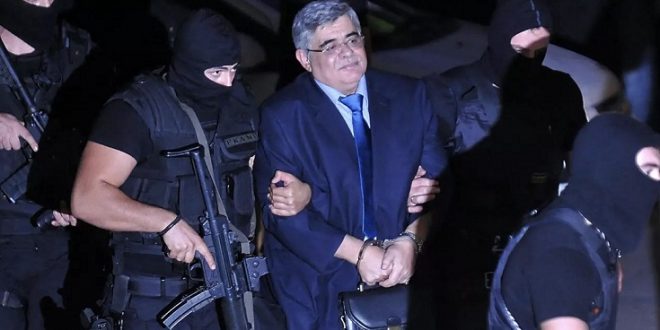 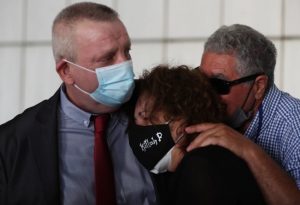 ATHENS: In a landmark verdict in Greece’s highest-profile political trial in decades, an Athens court on Wednesday found the neo-fascist party Golden Dawn guilty of running a criminal organization as it rose to prominence during the country’s financial crisis, systematically targeting migrants and left-wing critics.

The ruling came more than five years after the trial began in a makeshift courtroom in Greece’s largest high-security prison near Athens, and as at the beginning of the trial, none of the party officials were in the courtroom where the verdict was announced but thousands of Greek citizens had gathered outside the court on Wednesday, waving banners reading, “They are not innocent,” “Nazis out” and “Life terms to the murderers,” as some 2,000 police officers patrolled the area and helicopters and drones circled above.

The three-judge criminal court tied the party to a string of attacks including the fatal stabbing in 2013 of a left-wing rapper, Pavlos Fyssas. The party member who stabbed Fyssas, Giorgos Roupakias, was found guilty of murder on Wednesday. 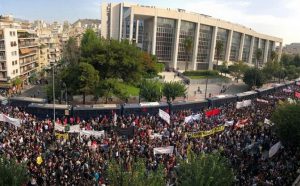 Formed in the 1980s by a former Greek army commando, the Golden Dawn party was catapulted from obscurity to become Greece’s third largest political party at the peak of the country’s financial crisis in 2012, tapping into public discontent against austerity and a growing influx of immigrants.

During its time in Greek Parliament from 2012 to 2019, the party maintained public support by casting itself as patriotic and fighting the system from within, but it retained links with neo-fascist parties in other European countries and the United States.

A spate of violent attacks in 2013, culminating in the fatal stabbing of Fyssas, precipitated the party’s unraveling.

A few days after the killing, police arrested the entire party leadership as a judicial investigation began into suspicions that Golden Dawn had conducted criminal activities under its military-style leadership. 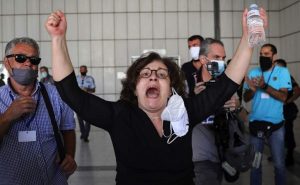 The trial eventually began in April 2015 with a 3,000-page case file, 69 defendants one has since died — and 120 witnesses for the prosecution. Although Golden Dawn’s legislators avoided appearing in court whenever possible, the proceedings took their toll on the party’s appeal, once at the forefront of Greek politics, Golden Dawn failing to win re-election to Greek Parliament last year.

But despite the party’s fall, the threat of neo-Nazism in Greece has not receded. Former members of parliament including Ilias Kasidiaris, Golden Dawn’s one-time spokesman, have formed their own parties espousing similar views. And less extreme right-wing parties have also sprung up in the party’s wake, including the nationalist Greek Solution.

Golden Dawn, for its part, has systematically denied any direct link to the attacks and has described the trial and charges brought against the party’s leadership as “politically motivated” and a “conspiracy.” “All supporters await an 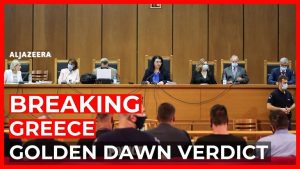 acquittal tomorrow, a decision that will trigger an even more vociferous nationalist campaign to reclaim our country,” the party said in a statement released on the eve of the trial.

The human rights group Amnesty International said in a statement on Monday that a guilty verdict would boost efforts to crack down on hate crimes.

“The accusations against the leaders and members of Golden Dawn, including the murder of Pavlos Fyssas, expose a fissure that exists not just within Greece but across Europe and beyond,” said Nils Muiznieks, Europe director at Amnesty. “The impact of this verdict, in what is an emblematic trial of an extreme far-right party with an aggressive anti-migrant and anti-human rights stance, will be felt far beyond Greece’s borders.” 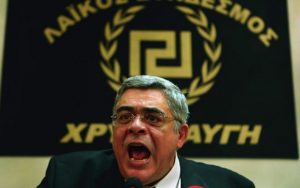 “Our country’s experience from the disastrous formation of the Nazi entity of Golden Dawn has been traumatic, painful, and, unfortunately, very bloody,” the Greek prime minister, Kyriakos Mitsotakis, wrote on Twitter last week.

When the news of the guilty verdict was announced, the thousands outside the court erupted in cheers that echoed out from the avenue and the surrounding balconies overlooking the court. The police fired tear gas and water cannons to disperse the crowd.

Speaking before the decision, Elena Karvouni, 68, who was among those gathered, said that it was important for her to be at the court, despite the pandemic. Some wore masks and gloves and some were attempting to maintain social distance in the crowd.

“As a mother and as a citizen of this country that has fought with blood against fascism, it wasn’t possible that I 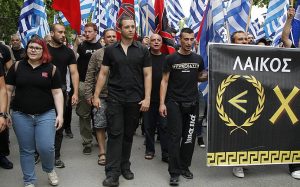 wouldn’t be here,” she said.

Elena Kritikou, 50, said that the throngs of young people crowing Alexandras Avenue in Athens and the area outside the court made her feel exhilarated.

“I feel like there is hope for a better tomorrow,” she said.

While waiting for the verdict, people chanted antifascist slogans “Pavlos lives, crush the Nazis,” and “No acquittal for the Nazis” while the Italian resistance song “Bella Ciao” played in the background.

“It is my duty to be here,” said Giannis, a 19-year-old computing student who did not want to give his last name. “I didn’t know Pavlos Fyssas personally but someone else could have also been in his place, it could have been me.”

“We don’t tolerate groups like Golden Dawn, it needs to be condemned,” he added. (Int’l Monitoring Desk)