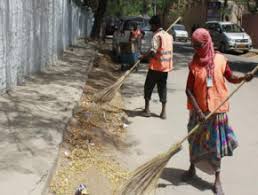 Hyderabad, Jan.29 (PMI): The Langar Houz police, along with Commissioner’s Task Force West Zone sleuths, solved the double murder mystery of two women with the arrest of a GHMC sweeper Ankur Giri, 34, and recovering a pair of gold earrings and one mobile phone from the accused. It may be mentioned here that victims Yadamma alias Ramulamma and Sumithra were brutally murdered by the accused for wrongful gain on January 21 under the limits of Langer Houz Police Station in Old City.

Announcing the arrest of the accused Ankuri Giri alias Giri Amma, 34, residing at Petlaburj near Charminar, on Tuesday, City Police Commissioner Anjani Kumar said the two women – Yadamma, 50, and Sumithra, 45, were lured to the murder spot by the accused, who offered to teach them black magic. On January 21, Giri, who was working as a GHMC sweeper at Chandrayangutta, met the two women at a toddy compound at Dattunagar in Kanchanbagh and told the women that he knew how to perform special poojas and that he could train them in black magic. Believing him, the two women followed the accused to the Musi Riverbed in Langer Houz where he attacked them with a granite stone resulting in their instant death. Later, he dumped the bodies in the river and left the place, the Commissioner said.

On the next day, the Langer Houz police received a complaint from one M. Sunder Singh, a farm labour of Ramsinghpura, Karwan, saying that on January 21 at 3 pm, he stepped into the Musi river to fetch the water and found bodies of two females. He immediately told his neighboring couple about the discovery of the two bodies. On being informed about the incident, police rushed to the spot and extricated the bodies from the Musi River.

The Police Commissioner asked the Task Force team to assist the investigation in identifying the accused. The sleuths plunged into action along with the Langar Houz police and identified accused as Ankuri Giri alias Giri Amma and arrested him on January 29. About ten years back the accused converted as a Shiva Satti and started performing pujas in temples. From 2010, he was working as a sweeper in GHMC, Chandrayangutta Circle.

The CP said on the evening of Januay 21, the accused went to toddy compound in Dathu Nagar, Kanchanbagh and saw the deceased women consuming toddy in Dathu Nagar Toddy compound and befriended them by saying he was a Shiva Satti having spiritual powers and offered to teach the duo special pujas and consumed toddy along with them and observed that the women were wearing gold ornaments. He immediately decided to commit theft of their gold ornaments from the deceased by physically eliminating them.

Later, the accused took the victims to an isolated place near Pillar No. 118 through Pisal Banda in an Auto. Later, the victims and the accused consumed today again. As planned, the accused made the victims to apply turmeric powder on their faces. Later, he picked up a big stone and killed the women by bashing on their heads. After taking their ear tops and one cell phone, the accused tied the bodies with a sari and dragged them into the Moosi River and left. The accused along with recovered property was handed over to Langer House Police. (PMI)