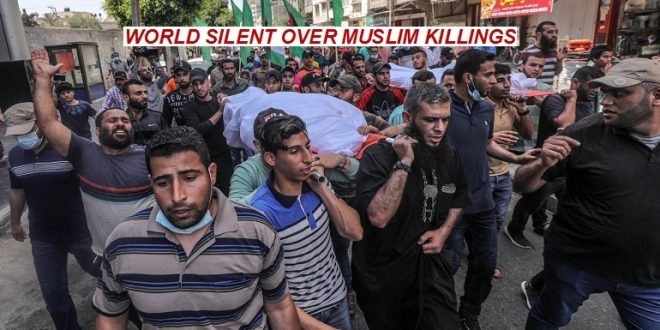 JERUSALEM/ GAZA: The Israeli military has continued its bombardment of the besieged Gaza Strip on Tuesday, targeting several areas after rockets were fired from the enclave.

Health authorities in Gaza said at least 28 Palestinians including 10 children were killed in Israeli air strikes on the strip since late on Monday, after Hamas launched rockets from the coastal territory towards Israel.

The rocket fire came after Hamas, which rules Gaza, issued an ultimatum demanding Israel stand down its security forces from the Al-Aqsa Mosque compound in occupied East Jerusalem after days of violence against Palestinians.

Israeli police stormed the compound on Monday for a third consecutive day, firing rubber-coated steel rounds, stun grenades and tear gas at Palestinian worshippers inside the mosque in the final days of the holy month of Ramadan.

More than 700 Palestinians were hurt in Jerusalem and across the occupied West Bank in recent days.

Egypt’s top diplomat told an emergency Arab League meeting that although it had reached out to Israel to calm tensions in Jerusalem, it was met with indifference.

“In the last few days, Egypt extensively reached out to Israel and other concerned countries urging them to exert all possible efforts to prevent the deterioration of the situation in Jerusalem,” said Egyptian Foreign Minister Sameh Shoukry,  “but we did not get the necessary response,” he told the meeting of the Arab League via videoconference. 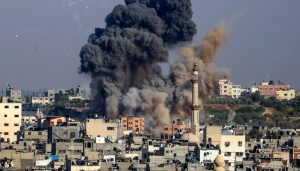 While not specifying the other countries Egypt contacted, he condemned “Israeli violations at the walls of Al-Aqsa Mosque which crossed over into Sheikh Jarrah” in east Jerusalem.

“Throughout the afternoon there has been constant rocket fire coming over [from Gaza].

“There was this barrage that came from the Gaza Strip earlier in the day with Hamas saying it was their biggest ever – nearly 140 rockets in five minutes,” said Fawcett, adding that Israel has neither confirmed nor denied these attacks.

“Whatever it was, it was enough to get through the Israeli air defences, the Iron Dome system,” he explained.

“The streets of Gaza are almost empty. People are staying home because of the intensive air strikes that Israel is carrying out,” said Kahlout.

“At this time of Ramadan, markets and the streets are usually overcrowded,” he added.

“We have been seeing the exchange of fire between the Israelis and the Palestinian armed groups. The last one was just a few seconds before we went on air,” he explained. (Int’l News Desk)

Post Views: 71
2021-05-11
admin
Previous HC to TS govt : why sudden decision on lockdown
Next Modi to skip G7 meet in Britain due to COVID crisis