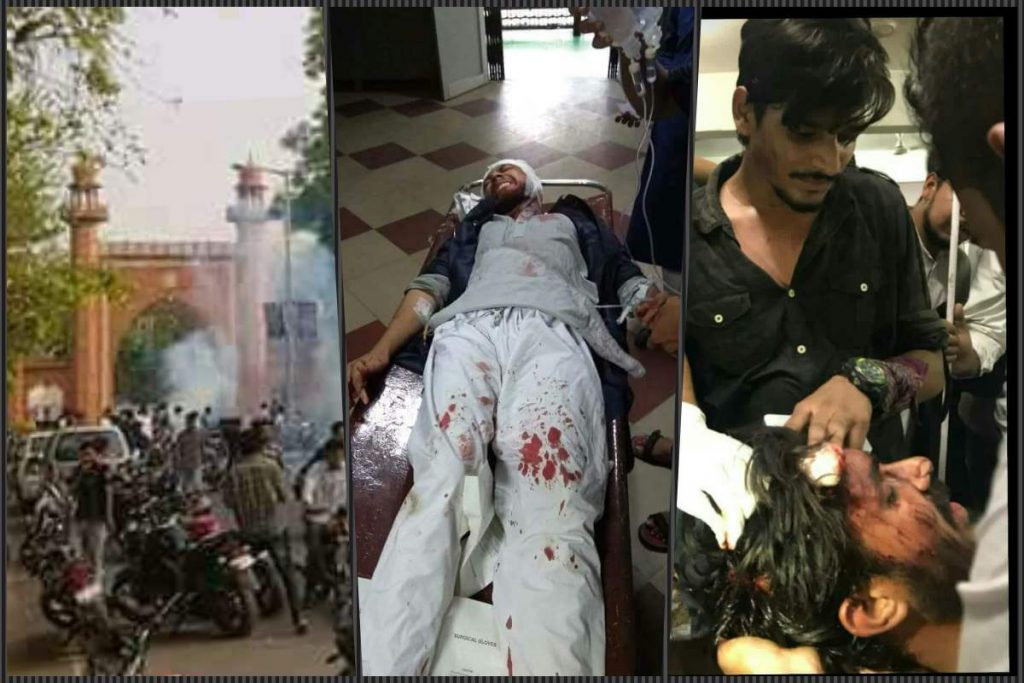 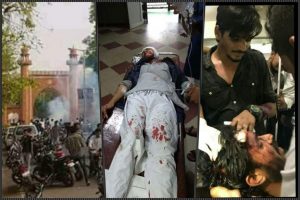 Aligarh: Scores of students at Aligarh Muslim University were injured Wednesday afternoon after armed activists from the Hindu Yuva Vahini descended on the campus with police backing to violently demand that a portrait of Mohammad Ali Jinnah – which has been hanging inside the students’ union hall for 80 years – be taken down.
After Jawaharlal Nehru University, Hyderabad University and Delhi University’s Ramjas College, AMU has thus become the latest university to come under the radar of Hindutva groups protesting what they claim are “anti-national” activities on campus.
Jinnah was active in the Indian freedom struggle until his Muslim League developed the ‘two nation theory’ that eventually led to the partition of India and the creation of Pakistan.
Hours before the former vice president of India, Hamid Ansari, was to visit AMU for an event, some 30 activists of the Hindu Yuva Vahini, accompanied by uniformed policemen, came to Bab-e-Syed – the central gate of AMU. They shouted slogans like ‘We will not let such respect for Jinnah pass in India”, “If you want to remain in India, you must say Vande Mataram’, “Vande Mataram, Jai Shri Ram!’ 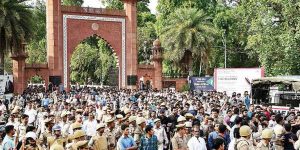 The policemen made a pretence of trying to stop the march some 50 yards from the gate. The HYC activists then waved pistols and other weapons in the air, endangering the lives of students.
As students’ union office bearers and other students came to the gate, a mild altercation ensued and six of the HYV activists were handed over to the police. The police reportedly did not file an FIR, and released the accused.
Soon, a large gathering of students collected at the gate to protest what they said was the unwillingness of the police to uphold the law.
The police, in turn, returned with reinforcements, as did the Hindu Yuva Vahini, and what followed, say students, was a lathi charge on the AMU community with HYV activists pelting stones as well. The students ran as the police chased after them inside the campus. More than 65 students were severely injured, including the president of AMUS, Maskoor Ahmed Usmani, secretary Mohammad Fahad, and former vice president Mazin Zaidi, who were taken to hospital.
After being unconscious for more than two hours, Usmani said, “This was a pre-planned, organised attack by the police and Sangh parivar members, against the institution, as well as the students. The police could not handle 30 Hindu Yuva Vahini members, but had no qualms in brutally beating up hundreds of innocent students.”
Later in the day, the university said it had decided to cancel the program for which Ansari had been invited.
Jinnah portrait dates back to 1938
The ‘provocation’ for Wednesday’s assault was a manufactured controversy surrounding a portrait of Mohammad Ali Jinnah hanging in the Union Hall of the AMU Students’ Union. The portrait is not new, nor has it recently been unveiled, contrary to the disinformation being spread on social media, but dates back to before the partition of India and the creation of Pakistan.
BJP MP Satish Gautam, who represents Aligarh, recently tried to stir up a controversy over Jinnah’s portrait and other leaders from the Sangh parivar leapt into the fray, accusing AMU of harbouring pro-Jinnah and pro-Pakistan views even today. The reality, as Mohammad Sajjad, a professor of history at AMU, explains, is that the portrait has been in the Students’ Union Hall since 1938, when Jinnah was awarded lifetime membership of AMUSU. The first person to have been documented as a life time members, was Mahatma Gandhi. In later years, Dr B.R. Ambedkar, Jawaharlal Nehru, C.V. Raman, Jai Prakash Narayan, and Maulana Abul Kalam Azad have also been awarded with the same among many others whose portraits still adorn the walls.”
“Those who are asking for removal of this portrait in the wake of the events of 1947 and Jinnah’s “two nation theory” do not know about the integrity of not changing historical facts and artefacts, as is clear by their attitude towards historical monuments, and modern syllabi. AMU, unlike the government, does not believe in distorting history to its favour.” he said.
Usmani said that those attacking AMU should remember that V.D. Savarkar, a revered figure within the RSS, was “head of the Hindu Mahasabha for years and boycotted the Non Cooperation movement and formed alliances in two provinces along with Jinnah’s Muslim League before partition.
Post Views: 91
2018-05-03
admin
Previous KCR, Akilesh discuss on Federal Front, SP chief remains non-committal
Next Ordinance to criminalise Triple Talaq in the making