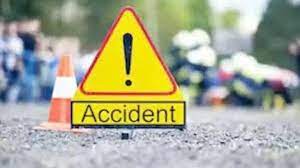 According to the details revealed by choutuppal CI Srinivas a TSRTC bus and a car collided at Dharmojigudem of the mandal killing the two riders of the car on the spot. The victims have been identified as Chandu , a resident of Jawahar Nagar in Hyderabad and sai pruthvi, a native of Asif nagar area of the city.

The incident also left five passengers of the bus injured.

The second accident took place at Lingojigudem of the mandal. A car hit a two wheeler bike in the area killing one of the two bike riders on the spot. The third accident took place at the same place . A tipper lorry hit a bike killing the two riders of the bike on the spot. The two victims have been identified as the private employees of a company from Veliminedu of Chityala mandal .

The police have rushed the victims to  Choutuppal government hospital  for performing post mortem.(PMI)