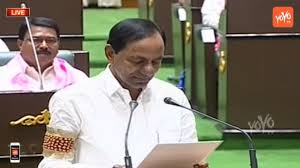 Hyderabad, Jan.17 (PMI): The first session of the second Assembly of Telangana State has begun here on Thursday with the swearing-in of the newly-elected Members. Pro-tem Speaker Mumtaz Ahmed Khan administered the oath of office and secrecy to the elected Members of the House. Chief Minister K Chandrashekhar Rao was the first to take the oath followed by lady members and then male members in alphabetical order of their names.
The present Assembly is special in several ways. The session started 36 days after the election of the Members. Probably this was the first time that the session commenced after a long time after the election results were announced. As many as 76 MLAs of the first Assembly were re-elected to the present House, which consists of a total of 119 members. It has 25 first-times elected MLAs.
Leader of the House K. Chandrashekhar Rao is the senior-most Member in the Assembly. He was elected to the House for eight times. He was followed by other senior MLAs like Errabelli Dayakar Rao, Redya Naik and Protem Speaker  Mumtaz Ahmed Khan.  The ruling party members like T. Harish Rao. Etala Rajender and Koppula Eeshwar were elected to the House for six consecutive times. Congress MLA from Kothagudem Vanama Venkateswara Rao (73) is the oldest Member of the House. The youngest Member is also from the Congress. The party’s woman MLA from Yellandu  Haripriya Naik was elected to the House for the first time at the age of 29 years.
Party-wise strength of the members is: The  ruling TRS has 88 members, the main Opposition Congress  19, MIM  seven, TTDP two, the BJP and RPI  one each,  besides an independent MLA. Two sitting MPs of the ruling TRS Balka Suman and Ch Malla Reddy contested the Assembly elections and won from Chennur and Medchal Assembly segments respectively. They later resigned from their MP posts. Similarly, two MLCs, one each  from TRS and Congress were also elected to the present Assembly. They are: P. Mahender Reddy and Komatireddy Rajagopal Reddy. The two have been elected from Munugodu and Kodangal Assembly constituencies respectively (PMI)