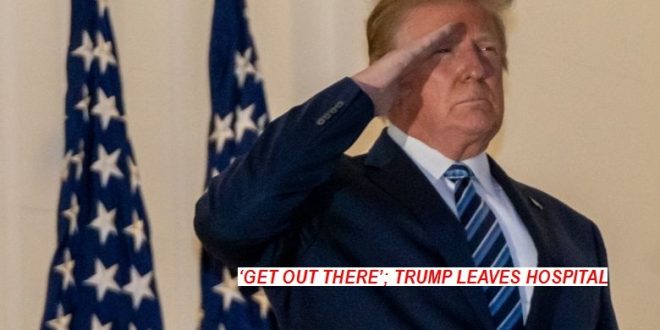 WASHINGTON/ NEW YORK: US President Donald Trump told Americans “to get out there” and not fear COVID-19 after he returned to the White House on Monday following three nights in a military hospital where he received experimental treatments to tackle a disease that has killed more than 210,000 Americans. 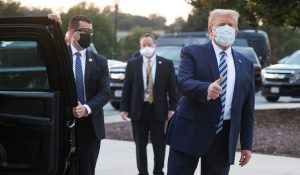 Trump, who still has the virus and remains contagious, took off his mask to pose for pictures and salute from the balcony of the White House. He later tweeted a video capturing his return to Washington, DC, and a message to his supporters.

Trump said he felt “real good” about his return to the White House, where a cluster of cases have emerged since he, his wife Melania and close adviser Hope Hicks were diagnosed last week. Press Secretary Kayleigh McEnany, along with two assistants and three White House journalists are the latest to test positive.

Trump wore a mask as he got out of the helicopter that flew him back from the Walter Reed military hospital outside Washington, DC, but removed it after he climbed the stairs of the White House South Portico, where he posed for pictures, waving, saluting and giving thumbs-up signs.

He then turned to walk into the White House, filmed by a cameraman, his mask still in his pocket.

“It was President Trump’s reality TV in a way; carefully produced, striking what he hopes are all the right notes,” said 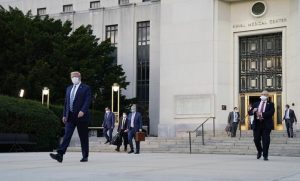 a media outlet, reporting from Washington, DC. Trump, a New York property developer, was best known as the star of the reality television show, The Apprentice, before he became president in 2016.

The Republican president, who is running for re-election against Democrat Joe Biden in the November 3 election, was admitted to hospital on Friday after being diagnosed with the disease caused by the novel coronavirus.

“Don’t let it dominate you. Don’t be afraid of it,” Trump said in the video message which he shared on Twitter. “We’re going to beat it. Don’t let it take over your lives. Maybe I’m immune, I don’t know.”

Trump, 74, has not had a fever in more than 72 hours and his oxygen levels are normal, his medical team told reporters before he left the medical facility.

The doctors declined to discuss any toll the disease could have had on the president’s lungs or disclose when Trump last tested negative for the coronavirus, saying they were in “unchartered territory” because the president had received new therapies as part of his treatment. 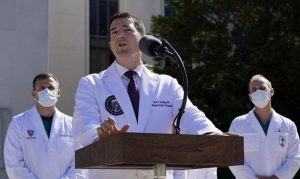 The team added that Trump had received supplemental oxygen twice in recent days.

“He may not entirely be out of the woods yet,” Dr Sean Conley, the White House physician, said, stressing that Trump would have world-class medical care around the clock at the White House.

The severity of Trump’s illness has been the subject of intense speculation, with some medical experts noting that, as an overweight, elderly man, he was in a category more likely to develop severe complications or die from the disease.

Doctors have been treating him with remdesivir, which is delivered intravenously, and a steroid, dexamethasone, that is normally used only in the most severe cases.

“He’s still infectious, and it will take around two weeks for him to clear the virus naturally,” Dr Ali Fattom, senior vice president of vaccines research at BlueWillow Biologics and an adjunct associate research professor at the University of Michigan told media. “The president will not be available to mix with people.” 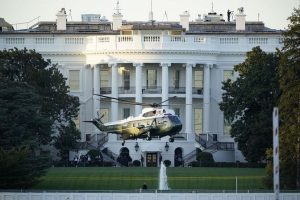 Trump has frequently downplayed the threat of the pandemic, refusing to wear a mask and flouting physical-distancing guidelines designed to curb the spread of COVID-19.

He was reluctant to go to hospital last week and was eager to get out, a source familiar with the situation told Reuters news agency earlier on Monday.

US House of Representatives Democratic Speaker Nancy Pelosi said she hoped Trump’s decision to return to the White House was not politically motivated and she expressed concern that he could become a “long hauler,” a term that refers to those who suffer COVID-19 complications over an extended period.

Trump’s medical team said he had not placed any pressure on the doctors treating him.

Even being discharged, Trump will need to continue treatment as he is still undergoing a five-day course of an intravenous antiviral drug, remdesivir, and will have to isolate himself for a certain period of time.

A Reuters/Ipsos poll released on Sunday showed Trump trailing Biden, 77, nationally by 10-percentage points. About 65 percent of Americans said Trump would not have been infected had he taken the virus more seriously. 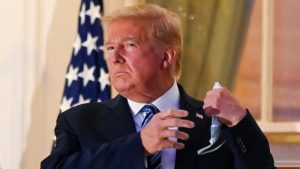 Biden on Monday castigated Trump for saying Americans should not be afraid of COVID-19 or let it “dominate your life,” and for his continued ambivalence about masks.

“I would hope that the president, having gone through what he went through – and I’m glad he seems to be coming along pretty well – would communicate the right lesson to the American people: masks matter,” Biden said at an outdoor town hall session in Miami.

“These masks, they matter. It matters, it saves lives, it prevents the spread of the disease.”

Trump mocked Biden at last Tuesday’s presidential debate for wearing a mask at events, even when he is far from other people.

Biden, who has tested negative for the disease several times since the debate, said on Monday he was willing to participate in the next presidential debate scheduled for October 15 in Miami if health experts deemed it safe.

Trump intends to take part in the debate, his campaign said. 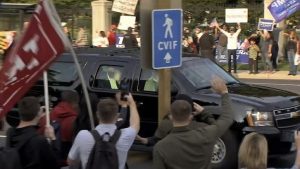 A return to the White House might help Trump project a sense of normality. Before falling ill, he tried to pivot the campaign toward the US economic recovery and the upcoming confirmation hearings for his Supreme Court nominee, Amy Coney Barrett but the growing number of COVID-19 cases in the White House as well as in Congress – three Republican senators have tested positive for the virus in the past week – is putting the spotlight on the Trump administration’s pandemic response.

Many appear to be politically motivated and conflicting information from the White House over the weekend hasn’t helped.

Officials gave varying answers on when the president had been given oxygen. Unanswered questions remain over when Trump last tested negative for the virus.

This left the internet to fill in the gaps with unfounded speculation. Here are some of the most viral rumors – and what we know about them. (Int’l News Desk)