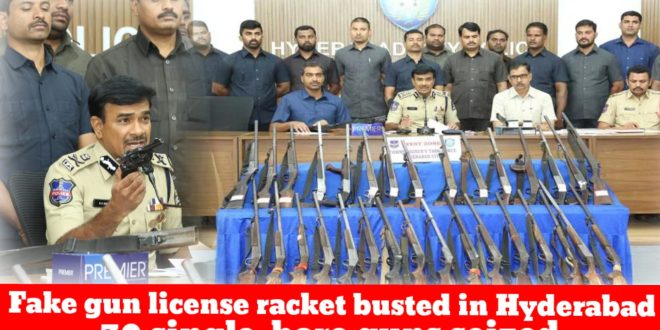 Hyderabad, Nov.17 (PMI): Seven men have been arrested by the Commissioner’s task force team for allegedly running a fake arms licence racket. The perpetrators used fake seals of licence issuing officials and forged the signatures to prepare the fake arm licences and procured real weapons. This is a great danger to the security of the city as illegal weapons are in circulation and being used for various purposes by dubious means. 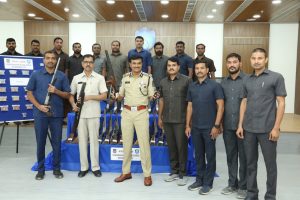 City Police Commissioner C V Anand presenting the facts of the case in his office and communicating through a press release, said the mastermind of the racket Altaf Hussain, resident of Rajouri district of Jammu & Kashmir, came to  city in 2013 for livelihood and joined Grace Management Security Service. Later he was deployed as Gunman in SIS cash service, West Marredpally. Prior to his employment in City, he purchased a doube-bore gun using a fake arms licence in Rajouri, which he had obtained by bribing the local magistrate office.

As Altaf Hussain was familiar with the process and licence details, he teamed up with Hafeezuddin, a stamp vendor in Secunderabad, and started issuing fake gun licenses by indulging in forgery and affixing fake seals. The fake documents have been used to procure real arms.  Further he steeped the illegal activity and starting issuing fake arms licenses and trapped the unemployed youth residing in J&K States, who tried to make a living as security guards in private security firms. 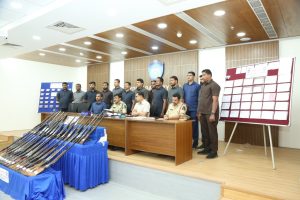 The infringement has taken place with the connivance of Venkata Konda Reddy,  Regional Manager at Grace Management Security Services and I. Srinivas, xerox shop owner in  West Marredpally. The accused used to collect Rs 20,000 from each unemployed youngster and later deployed them in various private security agencies, a serious lapse in the functioning of security firms. Asian Security  Services, Nandamuri Security & Services, Grace Management Security Services engaged  security guards, who were in possession  of illicit weapons and deployed them to their clientele which includes VVIPs, jewellery showrooms, agencies engaged for carrying ATM cash and as personal security guards.

“The power of issuing arms licenses and renewals is vested with police. This is illegal and a serious threat to public safety. The private security firms must adhere to  Private Security Agency Regulation Act (PSARA) under which the operation of private security agencies is governed. A private security agency cannot hire a guard with a firearms licence and they should also submit an undertaking to this effect. If banks, ATMs, Business establishments and so on want armed guards, they can apply for a arms license and then hire the armed guards as retainers from the security services,” said the top brass, “We have also alerted other commissionerates and District collectors”, added.

CP Anand said they will  conduct a meeting with all private security agencies  and urge them to voluntarily disclose the weapons in their possession. The City police also contemplates on issuing retainer licences to private security firms, who deploy their guards to commercial establishments, ATMs and other firms.