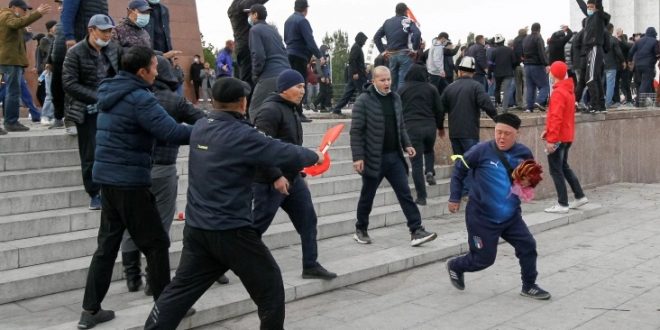 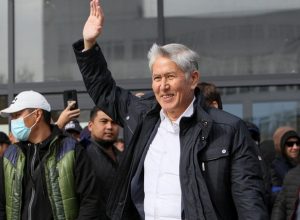 BISHKEK: The former president of Kyrgyzstan, Almazbek Atambayev, survived an assassination attempt in Bishkek when his car was shot at; Russia’s RIA news agency cited an aide as saying.

Friday’s apparent assassination attempt against Atambayev, who was freed from prison amid unrest following a disputed October 4 parliamentary vote, marked a new escalation of violence in the Central Asian country.

Hours earlier, President Sooronbay Jeenbekov, who is facing calls to step down, declared a state of emergency in the capital and ordered troops to quell unrest.

Chaos has gripped the capital since the controversial parliamentary election held less than a week ago, with supporters of rival political groups taking to the streets. The results of that election have now been annulled.

Atambayev was once close with his successor Jeenbekov, but the pair fell out shortly after the 61-year-old won the country’s last presidential election in 2017. 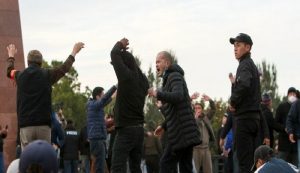 Atambayev was out among the crowds on Friday supporting Omurbek Babanov, a former prime minister who has emerged as a contender for the new PM role after the government of Kubatbek Boronov resigned.

Supporters of Atambayev and Babanov had gathered in the capital’s east, and were ready to watch them give speeches at the Ala-Too Square.

Proceedings started solemnly, with people honouring a 19-year-old protester who was killed in clashes days ago.

But a rival group of protesters, who support Sadyr Zhaparov, an opposition politician who was also released from jail and also wants the PM position, took to the stage, prompting a mass brawl.

There were clashes between the crowds for the next 10 minutes and Atambayev fled the scene. 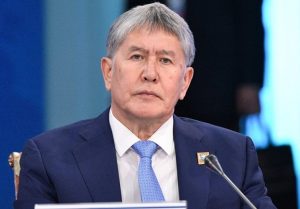 Tilek Toktogaziev, a businessman who is also vying to be the next prime minister, was also present – he was wounded by a flying rock.

Nazira Aytbekova, a presenter on state television, wrote on Facebook: “A real leader would have done everything in order to avoid bloodshed … Atambayev, Babanov, Zhaparov – you are not our leaders.”

Cholpon Djakupova, a legal expert, said: “Where are the law enforcement forces? Why did the interior ministry allow two sides to clash? … There are also children, young people, and women (in the streets).”

Since October 4, as well as the 19-year-old who was killed in protests, 700 people have been injured.

As the capital unravelled, Jeenbekov imposed a curfew and tight security restrictions that would be in effect from 8pm local time on Friday until 8am on October 21. 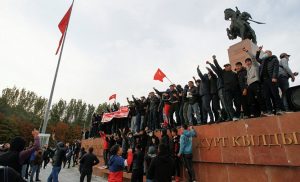 Jeenbekov’s order did not say how many soldiers would be deployed but they were instructed to use military vehicles, set up checkpoints and prevent armed clashes.

The news of the emergency rule came after Jeenbekov signed an order formally dismissing Boronov and his cabinet.

Jeenbekov also offered to resign on Friday in an address published on the presidential website, but only once a date for fresh elections had been set.

The opposition is divided between 11 parties which represent clan interests in a country that has already seen two presidents toppled by popular revolts since 2005.

The Central Asian nation has a history of political volatility – two of its presidents have been toppled by revolts in the past 15 years.

Russia has described the situation in Kyrgyzstan, which borders China and hosts a Russian military base, as “messy and chaotic”. 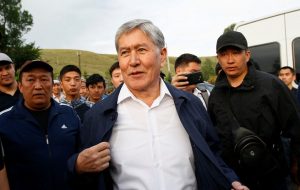 Moscow is a key foreign power with interests in Kyrgyzstan and has attempted to broker internecine disputes in the past. But it was unclear if the Kremlin could help stabilize a fluid situation in the republic.

Stanislav Zas, the secretary general of the Collective Security Treaty Organization (CSTO) – a Moscow-led security bloc, suggested that it could play a “mediating role”.

The crisis tests the Kremlin’s power to shape politics in its former Soviet sphere of influence, at a time when fighting has erupted between Armenia and Azerbaijan, and Belarus is also engulfed in protests.

“Seems like (Russian President) Vladimir Putin is very concerned about how the situation here could deteriorate. And it seems as if he’s reigned Jeenbekov in,” he said.

“Let’s not forget Russia has big interests here in Kyrgyzstan – geopolitically and in terms of investments.

“This is a country that buys Russian gas, Russian infrastructure. It is all maintained by Russia.” (Int’l Monitoring Desk)