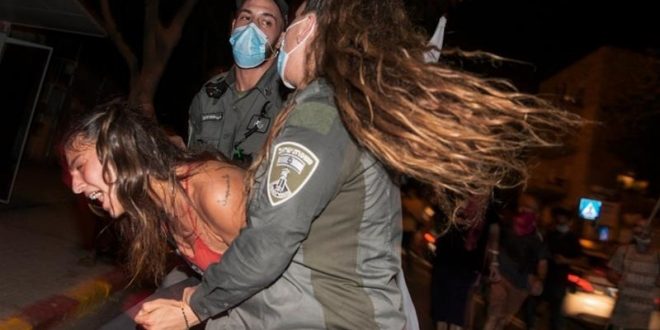 ‘Enough with you’: protesters keep pressure on Netanyahu 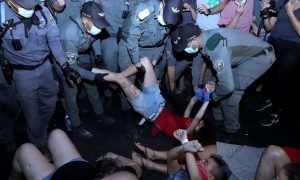 JERUSALEM: Thousands of Israelis protested outside the official residence of Prime Minister Benjamin Netanyahu on Saturday night and into early Sunday, pressing ahead with a months-long campaign demanding that the embattled Israeli leader resign.

The protests, now in their 11th week, came as Israel is coping with record levels of coronavirus infections.

Demonstrators have been protesting Netanyahu’s handling of the coronavirus crisis, which has led to soaring unemployment, and they say he should step down while on trial for corruption charges.

Protesters held banners reading “Revolution” and “Get out of here” and held blue-and-white Israeli flags. A sign aimed at the prime minister was projected on a building reading in Hebrew: “Enough with you.” 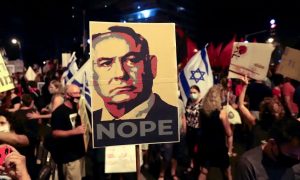 Smaller crowds gathered on bridges and at intersections across the country, also calling for Netanyahu to step down.

The government moved quickly to contain the coronavirus last spring, but bungled the reopening of the economy and now finds itself dealing with a stronger outbreak.

The death toll has surpassed 1,000 people, and the country is considering a new lockdown to stop the rapid spike in daily infections. Israel currently has over 26,000 active COVID-19 cases.

Although the demonstrations have largely been peaceful in recent weeks, protesters scuffled with police in several locations.

At least 13 arrests were made, including that of a man who police said “was dressed up as a woman in a provocative way”.

Police also said two officers were lightly injured when a crowd burst through a police blockade. 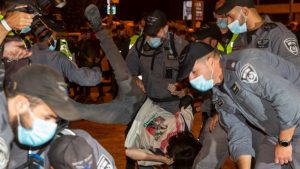 Netanyahu has dismissed the protesters as “leftists” and “anarchists”. But his tough talk and even a series of foreign policy accomplishments have done nothing to deter the crowds.

On Friday, Serbia and Kosovo gave Israel a diplomatic boost as Serbia announced it will move its embassy to Jerusalem and Kosovo said it will establish ties with Israel with an embassy in Jerusalem.

The announcements, making the countries the third and fourth to move their embassies to contested Jerusalem, follow Israel’s historic agreement last month to establish diplomatic ties with the United Arab Emirates.

Netanyahu has vowed to remain in office despite being charged last year with bribery, fraud and breach of trust in three long-running corruption investigations.

He has denied the allegations, calling them a “witch-hunt” and lashing out at the judiciary, law enforcement and media. (Int’l News Desk)