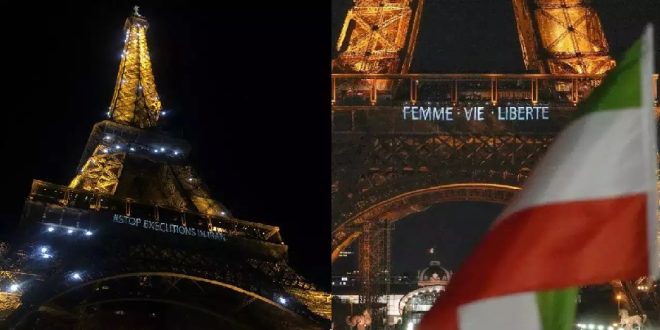 Eiffel Tower lights up in support of women protesting in Iran

PARIS: Up to 12,000 people marched Monday to the EU Parliament in the eastern French city of Strasbourg in support of Iran’s anti-government protesters while the Eiffel Tower lit the night with the slogan “Woman. Life. Freedom,” which embodies the protest movement spilling beyond Iran. 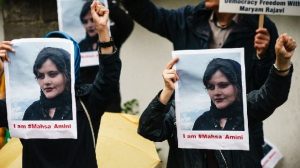 Both messages pay tribute to Mahsa Amini, whose death in September triggered demonstrations in Iran, along with arrests and executions.

Paris posthumously declared Amani an honorary citizen in October, and Paris City Hall has said that the Eiffel Tower displays Monday were an homage to Amini and to “those who are bravely fighting for their freedom as the (Iranian) regime is continuing executions of protesters.”

The Strasbourg march was organized by Iranians in Europe on the 44th anniversary of the day when Iran’s last shah, Mohammad Reza Pahlavi, ailing and under growing pressure, left the country forever. The following month, the monarchy collapsed under the fervor of the Islamic revolution that gave Iran its theocracy. Some of the demonstrators Monday carried photos of the former shah. 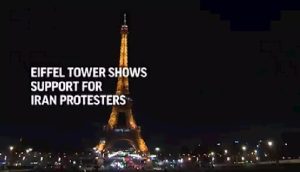 “Your silence is violence,” one banner read, reflecting the demand of Iranian protesters abroad to support their message and ensure Tehran hears it.

The European parliament’s plenary session is to debate the EU’s response this week to the protests and executions in the Islamic Republic. A non-binding resolution is to be voted on Thursday, which protesters and others see as a chance to put the Revolutionary Guard on the EU’s terrorist list.

Dutch Foreign Minister Wopke Hoekstra said on Monday after a meeting with his German counterpart Annalena Baerbock in The Hague that they both had summoned Iran’s ambassadors in their respective countries to protest executions of protesters and British-Iranian former defense ministry official Ali Reza Akbari. 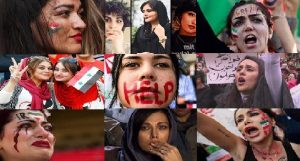 Iran has been rocked by protests since the Sept. 16 death of 22-year-old Amini, who died after being detained by the morality police. The protests have since become one of the most serious challenges to Iran’s leaders.

A hundred days after they began, the longest running anti-government protests in Iran since the 1979 Islamic revolution have shaken the regime, but at a heavy cost to the people.

More than 500 protesters, including 69 children, have been killed, according to the Human Rights Activists’ News Agency (HRANA). Two protesters have been executed and at least 26 others face the same fate, after what Amnesty International calls “sham trials”. (Int’l Monitoring Desk)

Share
Previous Two arrested in case of Indians who froze to death
Next CM KCR announces funds of Rs 248.9 crore for Khammam