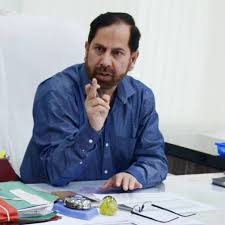 Hyderabad, Feb.9 (PMI): The Election Commission has taken a decision to recommend suspension of Vikarabad District Collector Omar Jaleel for violation of the election code during the recent Assembly polls.

According to the information, Congress leaders Marri Shashidhar Reddy, G Prasad and others filed a complaint to CEO Rajat Kumar on violation of the poll code against Omar Jaleel. They alleged that the district Collector had got opened the EVMs and VVPATS when the matter was in the court, which was violation of the poll code. On this, the Election Commission took a serious note and recommened suspension of the Collector to the State government. The Collector gave clarification that he was not aware of a court case in this regard and did not do anything intentionally.

However, the EC was not convinced and felt that the Collector ignored the CEO suggestion on the issue and directed the State government to suspend Omar Jaleel. (PMI)