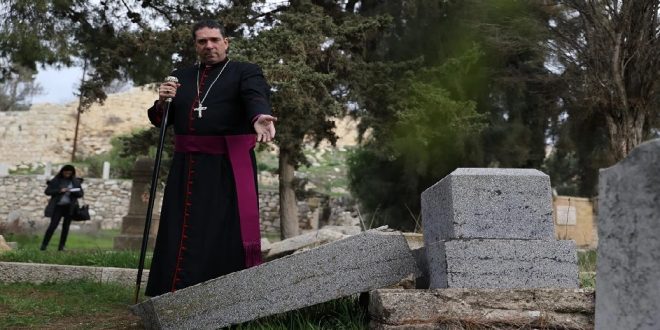 JERUSALEM: A Jerusalem bishop said Wednesday he was “dismayed” by the desecration of dozens of Christian graves on the edge of the Old City, as police probed the vandalism. 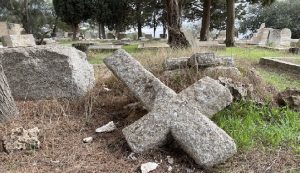 “We discovered that more than 30 tombstones and crosses were smashed to pieces,” Hosam Naoum, an Anglican bishop, told journalists at the cemetery.

“These criminal acts were motivated by religious bigotry and hatred against Christians,” the Episcopal Diocese of Jerusalem said in a statement.

Israeli police said they had launched an investigation into “the defacement of a large number of tombstones in the Protestant cemetery”.

Standing before one of the damaged graves, Naoum said: “We are not only dismayed but we are very much saddened.”

The bishop said the cemetery was established in the mid-19th century and is the final resting place of figures including clergy, scientists and politicians. 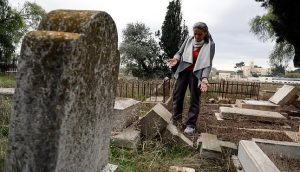 Among them were “people of great importance that have contributed to the history of Jerusalem and to the life of the people here,” he said.

Israel’s foreign ministry called for the perpetrators to be prosecuted, writing on Twitter that “this immoral act is an affront to religion.”

Mount Zion lies outside the Old City walls and has drawn pilgrims for centuries. It is also revered by Jews, as the burial place of biblical King David.

In December 2021, church leaders warned that “Christians have become the target of frequent and sustained attacks by fringe radical groups” in Jerusalem and the wider Holy Land.

Diplomats said both the United Arab Emirates and China asked the UN Security Council to meet publicly to discuss the issue, likely on Thursday. 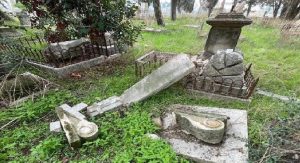 UN Secretary-General Antonio Guterres “calls on all to refrain from steps that could escalate tensions in and around the holy sites,” UN deputy spokesman Farhan Haq said.

When asked about the visit, a White House National Security Council spokesperson said any unilateral action that jeopardizes the status quo of Jerusalem holy sites is unacceptable.

In an apparent effort to lower the temperature, an official in Israeli Prime Minister Benjamin Netanyahu’s office said the premier was fully committed to the site’s decades-old status quo allowing only Muslim worship there.

Al Aqsa is a symbol for Palestinian hopes of securing a state, a goal that looks ever bleaker with Ben-Gvir and other far-right allies now in Netanyahu’s government.