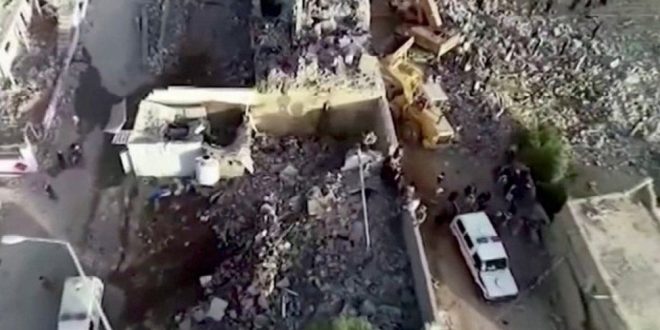 SANA’A/ RIYADH: Dozens of people have been killed in an air raid on a prison in northern Yemen, medical charity Doctors Without Borders (Medecins Sans Frontieres, or MSF) has said, after a night of deadly bombing underlined a dramatic escalation in violence in the country’s long-running conflict. 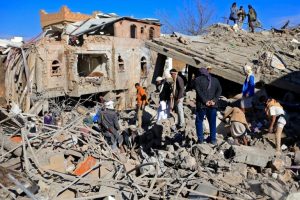 A Saudi-led military coalition has intensified air raids on what it has said are military targets linked to the Houthi rebel movement, after the Houthis conducted an unprecedented assault on coalition member the United Arab Emirates on Monday and further cross-border missile and drones launches at Saudi cities.

Footage released by the Houthis on Friday showed rescue workers pulling bodies from out of the rubble, following the dawn raid on the temporary detention centre in Saada.

At least 70 people were killed and 138 others were wounded in the attack, an MSF spokesperson told media.

The figures came from one hospital in Saada, the spokesperson said, adding, “Two others in the city have received many wounded as well and the rubble is still being searched.”

Basheer Omar, spokesperson for the International Committee for the Red Cross (ICRC) in Yemen, said numbers were still rising following the attack in Saada, home city of the Houthi rebel movement. 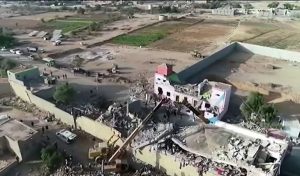 “There are more than 100 killed and injured … the numbers are going up,” he said, citing figures at two Saada hospitals supported by the ICRC.

Further south in the vital port city of Hodeidah, video released by the Houthis showed bodies in the rubble and dazed survivors after an overnight air attack from the Saudi-led coalition took out a telecommunications hub. Yemen suffered a nationwide internet blackout, a web monitor said.

NetBlocks said the internet disruption began around 1am local time (22:00 GMT on Thursday) and affected TeleYemen, the state-owned monopoly that controls internet access in the country.

More than 12 hours later, the internet remained down. The Norwegian Refugee Council decried the attack as “a blatant attack on civilian infrastructure that will also impact our aid delivery.”

According to the UK-based charity Save the Children, at least three children were killed in the Hodeidah air raid. 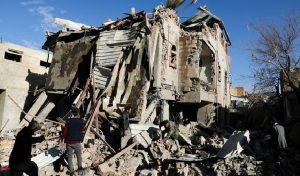 The organization said at least 60 people were killed in the air raid in Saada and more than 100 others wounded, most of them migrants, it added.

“The initial casualties report from Saada is horrifying,” said Gillian Moyes, Save the Children’s country director in Yemen, in a statement.

“Migrants seeking better lives for themselves and their families, Yemeni civilians injured by the dozens is a picture we never hoped to wake up to in Yemen.”

Yemen’s civil war began in 2014 when the Houthis overran the capital Sanaa, prompting Saudi-led forces to intervene to prop up the government the following year.

On January 3, the Houthis hijacked a United Arab Emirates-flagged ship in the Red Sea, prompting a warning from the coalition that it would target rebel-held ports. (Int’l News Desk)

Share
Previous HELD TWO PERSONS – WHO ARRANGING FAKE (COVID-19) RT-PCR NEGATIVE & VACCINATION CETIFICATES IN ABSENCE OF CUSTOMERS
Next What next for Iran-Russia ties after Raisi-Putin meeting?