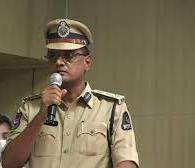 Hyderabad: The two accused Rohit Goud and Suman Reddy who were involved in the hit-and-run case of two persons on road no. 2 of Banjara Hills on Sunday night were heavily drunk. AR Srinivas, Jt CpWest Zone , said, “At around 5.15 pm the accused duo went to Olive Bistro Bar and Restaurant near Durgam Cheruvu and partied with friends. They were in the bar till 9 pm and left at 9.30 pm. They came to ‘Fat Pigeon’ Bar and Restaurant, Jubilee Hills, at around 10:30 pm and consumed liquor while celebrating till 11:45 pm. From there they started towards Radisson Blu Hotel, Banjara Hills, and reached at around 12:30 am and stayed there till 1:20 am as they consumed liquor.”

“After consuming liquor at Radisson Blu Hotel, they headed home. When the duo reached near White Crow, opposite Rainbow Hospital, they hit two men who were crossing the road. They realised that they had committed an accident. After travelling some distance they took a left turn from KBR Park and a ‘U’ turn, went to the Jubilee Hills check-post and travelled in the wrong direction towards Yellareddyguda and went to Padmavati Nilayam, where they met friends, parked the car in the apartment and left,” said the officer.
He added, “The duo came back later in a different car to check whether the police officers had come to the spot. They saw that police officers had already reached Padmavathi Nilayam, but still they attempted to take out their Porsche car from the apartment and were identified by police constables who were on duty. They had also seen the car going in wrong direction. The police officers caught the duo. When it was verified that they were involved in the accident, they were detained and arrested.”