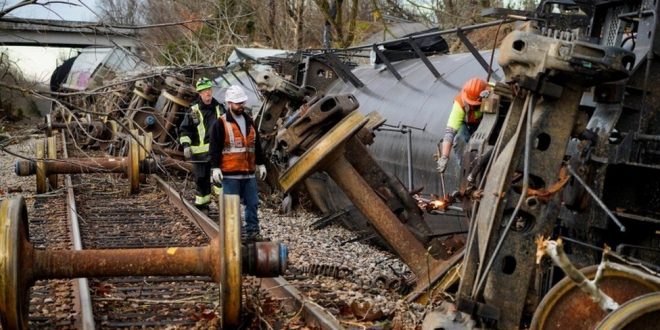 KENTUCKY/ WASHINGTON: A desperate search for survivors is under way in parts of six US states devastated by powerful tornadoes that have left at least 83 people dead.

Dozens more people are missing and entire towns were destroyed by about 30 tornadoes on Friday.

President Biden has declared a disaster in Kentucky, the worst-affected state.

More than 70 people have died in the state, including dozens in a candle factory, and the death toll is expected to rise above 100.

Local congressman James Comer, working with rescuers in the ruined town of Mayfield, said the tornado there was the widest ever seen. 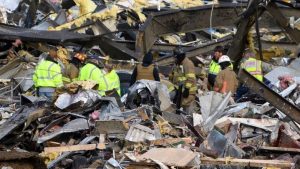 “It’s the most devastating storm damage I’ve seen in my entire life. We’ve had tornadoes that have been the same length as this tornado but we’ve never had one with the width of this tornado,” he said.

Forty people have been rescued from the collapsed candle factory in Mayfield but 60 more remain missing and Kentucky Governor Andy Beshear, who has visited the scene, said it was unlikely there were more survivors.

“There’s at least 15ft of metal with cars on top of it, barrels of corrosive chemicals that are there. It’ll be a miracle if anybody else is found alive in it,” he said.

One candle factory employee made a desperate plea for help on Facebook from under the wreckage as co-workers could be heard moaning in the background.

“We are trapped, please, y’all, get us some help,” said Kyanna Parsons-Perez – who was later rescued – in the broadcast played on CNN.

“Out of nowhere the sirens went off and then not long after that our ears popped. I mean it was like the pressure dropped. And then it felt like our house was about to just be gone, get carried off,” he said.

“It looks like a bomb went off. I don’t know how anybody could’ve lived. I feel bad for anybody that didn’t make it or people who got stuck. I’m sure it was terrifying.” 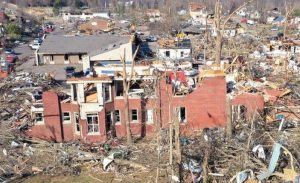 Beshear said the tornado had wrecked places all along its 227-mile (365km) path, including the town of Dawson Springs.

“One block from my grandparents’ house, there’s no house standing and we don’t know where all those people are,” he said.

Tornadoes also collapsed an Amazon warehouse in Edwardsville, Illinois, killing six people. Police said it was still unknown how many workers were missing. Amazon founder Jeff Bezos said he was “heartbroken” and pledged support to the community.

Biden has signed a Federal Emergency Disaster Declaration, releasing funds for Kentucky. He said the loss of life caused by the tornadoes was a “tragedy”.

The president said teams from the emergency agency Fema would go to Kentucky on Sunday to offer additional resources including help with temporary housing for those whose homes had been destroyed or badly damaged.

Tens of thousands of people in the state remain without power and water.

Emergency funds were also available for the other affected states – Missouri, Arkansas, Illinois, Tennessee and Mississippi – if they needed it, Biden said. (Int’l Monitoring Desk)