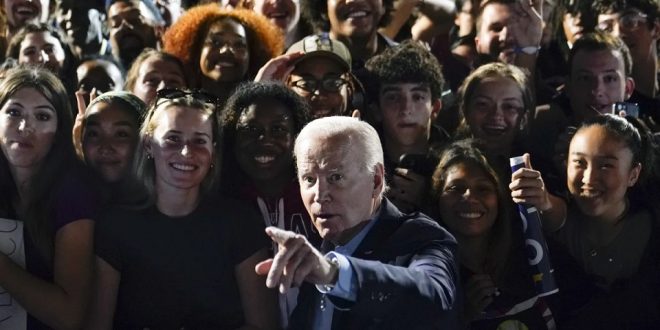 YONKERS/ UNITED STATES: President Joe Biden pulled out the stops Sunday to mobilize US voters in defence of democracy, hoping to counter a Republican “red wave” in this week’s midterms that could help set Donald Trump on a course back to the White House. 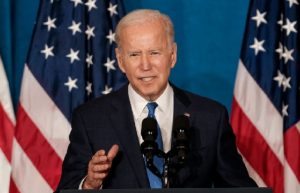 “If you all show up and vote, democracy sustained, not a joke,” the 79-year-old told a rally in upstate New York, historically Democratic territory with two days to go until Tuesday’s vote.

“This is your generation’s moment to defend it. To preserve it. To choose it,” Biden told the audience at St Lawrence University, turning solemn as he recalled last year’s assault on the US Capitol by Trump supporters refusing to accept defeat.

At the southern end of the Atlantic coast, in Miami, Trump held a competing rally in support of Florida Republican candidates but his own political future was more front and centre.

“I will probably have to do it again,” teased the 76-year-old, sporting his iconic red hat urging supporters to “stay tuned” for his final campaign rally, Monday night in the Midwestern state of Ohio.

Polls in the final stretch put Republicans ahead in the fight for the House of Representatives, and also show them gaining momentum in key Senate races as voters seek to take out frustration over four-decades-high inflation and rising illegal immigration. 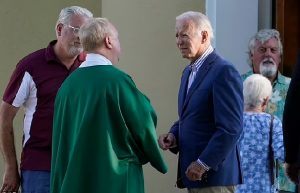 Tens of millions of Americans have already cast early ballots, but bringing out the vote on Tuesday will likely prove decisive.

With all 435 seats in the House of Representatives up for grabs alongside a third of the 100-member Senate and a slew of state posts, Democrats were putting a brave face on their prospects but the latest polls have put them on the defensive.

“This is going to be a wake-up call to President Biden,” predicted Glenn Youngkin, the Republican governor of Virginia, saying his camp was offering “common-sense solutions” to everyday issues like inflation and crime.

US midterm elections are typically seen as a referendum on the president in power, whose party tends to lose seats in Congress, particularly if as with Biden, the president’s approval rating is under 50%.

Worryingly for Democrats, a new NBC News poll found that fully 72% of voters believed the country is headed in the wrong direction, to 21% who saw it as being on the right track. 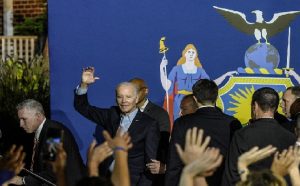 In swing state Pennsylvania, Republican Senate candidate Mehmet Oz on Sunday hammered on that message to rile up a crowd at his rally.

“How many of you are worried about America right now?” he asked the crowd in the Pittsburgh suburbs, receiving a round of applause.

The theme resonated with Paul Nelson, 80, a longtime Republican from suburban Philadelphia who sees two priorities for America: bring inflation down and tighten up border controls with Mexico to counter drug smuggling.

“If Republicans can take over the Congress,” said Nelson, wearing a baseball cap decorated like the US flag, “then we get a president like Trump. We will be back to where Trump ended.”

With the former president doubling down on voting conspiracy theories, and several candidates in his camp casting doubt on the upcoming midterm results, party chair Ronna McDaniel sought to assure voters that Republicans will accept the outcome even if they lose.

“They will,” she told CNN Sunday, when the question was put to her directly. 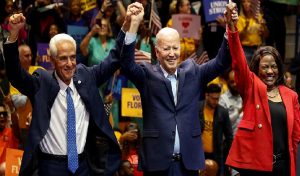 Biden has repeatedly called out Trumpists’ growing embrace of election conspiracy theories as a cause for deep concern, warning at a rally in Philadelphia that “democracy is literally on the ballot” and calling it “a defining moment for the nation” but there is little indication that Biden’s dire warnings have turned the tables in his favour, with polls suggesting Democrats have struggled to convince voters on kitchen-table issues central to the election.

Democrats have pushed back against the narrative of an inevitable Republican takeover of Congress.

“We’re going to hold this majority,” congressman Sean Patrick Maloney, who heads the Democratic congressional campaign arm, told NBC, saying Biden unfairly received a “bum rap” for inflation and too little credit for successes like job growth but Biden’s choice of destination on Sunday to support New York’s Democratic governor, Kathy Hochul, who faces an unexpectedly strong Republican challenge to reelection is a sign of just how nervous his camp has grown. (Int’l Monitoring Desk)