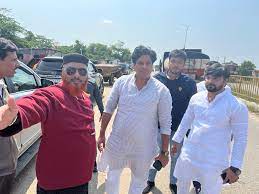 Congress minority leaders to accord grand welcome to Rahul Gandhi

Hyderabad, Oct.22 (ٖٖAli Abbas-  PMI): The minority leaders of the Congress party are making elaborate arrangements to accord a warm welcome to AICC leader Rahul Gandhi on Bharat Jodo Yatra’s entry in Telangana on Sunday.

“Rahul Gandhi’s Bharat Jodo Yatra has been receiving tremendous response. It was a huge success in Tamil Nadu, Kerala, Karnataka and Andhra Pradesh and it will be a grand success in Telangana. The TPCC Minorities Dept is trying to ensure the participation of a large number of people belonging to minority communities. We’ve formed special committees in all districts to convey information about the schedule to ensure that people living in nearby places join the Bharat Jodo Yatra from their respective locations,” informed Shaik Abdullah Sohail. He said the minorities were badly affected due to the atmosphere of hatred and violence created by the BJP Govt across the country. Minorities had almost lost hopes of resumption of peace in their areas. However, Rahul Gandhi’s Bharat Jodo Yatra has revived hopes and created a sense of security among the minorities, he said.

Abdullah Sohail said the Congress party, through Bharat Jodo Yatra, has been trying to convey a message that the country needs to reject the ideology of hatred and division based on religion, caste, region and gender. He alleged that the TRS Govt in Telangana was pseudo-secular. “Everyone knows Chief Minister K. Chandrashekhar Rao is a big fan and follower of Prime Minister Narendra Modi. KCR has played a prominent role in strengthening the BJP at the national level. TRS MPs supported all the controversial bills passed by the BJP Govt in Parliament. As rightly pointed out by Rahul Gandhi in the past, TRS is in fact T-RSS (Telangana’s RSS). TRS Govt stopped or reduced the funding for welfare schemes for minorities. KCR Govt demolished six mosques across Telangana while wearing a fake mask of secularism. Rahul Gandhi’s Bharat Jodo Yatra will help us in exposing the true and communal face of KCR before the people,” he said. (PMI)