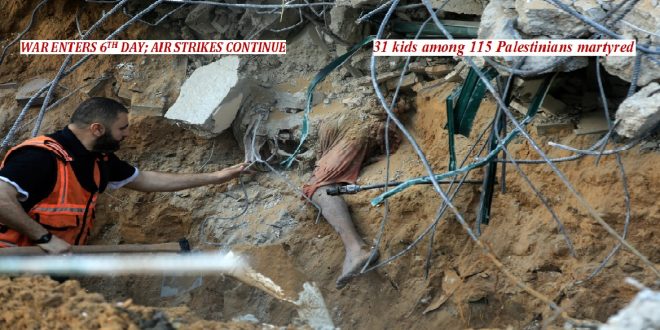 WASHINGTON/ JERUSALEM/ GAZA CITY: Several Democratic members of the House of Representatives have spoken out against the United States’ military support for Israel and called for the protection of Palestinians’ rights, in contrast to other Democrats and Republicans who expressed their full support for Israel during the ongoing escalation in the Gaza Strip.

In an emotional speech on the House floor, Rashida Tlaib criticised President Joe Biden and other top officials for offering statements that she said did not acknowledge “Palestinian humanity”.

“To read the statements from President [Joe] Biden, Secretary [of State Antony] Blinken, General [Lloyd] Austin and leaders of both parties, you would hardly know Palestinians existed at all,” said Tlaib, the US Congress’s only Palestinian-American member.

“There has been no recognition of the attack on Palestinian families being ripped from their homes right now. No mention of children being detained or murdered. No recognition of a sustained campaign of harassment and terror by Israeli police against worshippers kneeling down and praying and celebrating the holiest days in one of their holiest places, no mention of Al-Aqsa being surrounded by violence, tear gas, smoke, while people pray.” 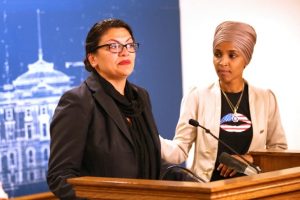 Wearing a keffiyeh and at times trying to hold back her tears, Tlaib added: “If our own State Department can’t even bring itself to acknowledge the killing of Palestinian children is wrong, well, I will say it for the millions of Americans who stand with me against the killing of innocent children, no matter their ethnicity, or faith,” she added.

Israel continued on Friday to bombard the Gaza Strip with air raids and artillery shells and amassed troops and tanks near the besieged Palestinian enclave.

At least 119 Palestinians, including 31 children, have been killed and more than 830 wounded since hostilities flared up on Monday. Rockets fired by Palestinian groups in the Strip have also killed seven people in Israel.

The US administration has expressed its sympathy for all casualties but did not single out any side or criticize Israel for disproportional use of force.

Biden said on Wednesday that Israel has a right to defend itself, while in his latest comments on Thursday he repeated a call for both sides to hold fire.

“The question is how … they get to a point where there is a significant reduction in the attacks, particularly the rocket attacks that are indiscriminately fired into population centers,” he said.

“Consider that 78 percent of their (Palestinians’) land was taken from them,” Omar said, referring to the time passed since the establishment of the Israeli state in 1948.

“Since then, 5.6 million Palestinians have been continually displaced from their homes in one of the largest among the lasting refugee crises in human history.”

“It is a conflict where one country, funded and supported by the United States government, continues an illegal military occupation over another group of people,” she said.

Congresswoman Cori Bush, a prominent supporter of the Black Lives Matter movement, paid tribute to Bassem Masri, a Palestinian American who backed the movement and died of a heart attack in 2018. 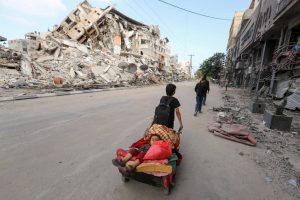 “Palestinians know what state violence, militarized policing and occupation of their communities look like, and they live that reality of having to go through checkpoints while trying to live their lives,” Bush said.

“We are anti-war, we are anti-occupation, and we are anti-apartheid,” she said, in addition to the several other members of the US Congress who took the floor to back Palestinian human rights.

During her speech, Congresswoman Ayanna Pressley said: “We cannot remain silent when our government sends $3.8bn of military aid to Israel that is used to demolish Palestinian homes, imprison Palestinian children, and displace Palestinian families. A budget is a reflection of our values.”

For her part, Alexandria Ocasio-Cortez called on the Biden administration to acknowledge its role in the injustice and human rights violations suffered by Palestinians.

“This is our business. Because we are playing a role in it,” said the congresswoman, before adding; “this is not about both sides. This is about an imbalance of power.”

“The president and many other figures this week stated that Israel has a right to self-defence and this is a sentiment that is echoed across this body,” the congresswoman said. “But do Palestinians have a right to survive? Do we believe that and if so, we have a responsibility to that as well.”

Mark Pocan said his colleagues and himself “stood up because no one should suffer the loss of life, liberty, or dignity that the Palestinian people have suffered”.

He added: “If you are neutral in situations of injustice, you have chosen the side of the oppressor.”

Conversely, several House Democrats also took to the chamber to voice their full backing of Israel.

Debbie Wasserman-Schulz expressed her “unwavering and steadfast support for the state of Israel”.

“Hamas and Islamic Jihad are single-handedly responsible for the escalation that has led to the bloodshed of Israelis and Palestinians,” she said, referring to the group that runs the Strip and another Gaza-based faction.

“No nation should be subject to a barrage of rocket fire like what we see on this easel on a civilian population. Without the Iron Dome air defence system, the loss of life would be worse than the nightmare before us today.” 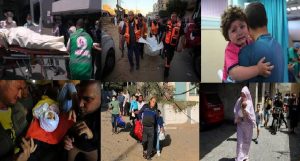 Josh Gottheimer, a Democratic Congressman from New Jersey, stressed that Hamas was a “terrorist organization” designated by the US.

“No one here should make excuses for a terrorist organization. Who is the next target of their sympathy? ISIS, al-Qaeda, Hezbollah?” he said.

“Even though we may not always agree about Israel’s policies, we should be very clear that nothing, nothing justifies a terrorist organization firing rockets at our ally.”

“President Biden has declared unwaveringly our support for Israel’s right to defend itself,” he said.

“We grieve every civilian death, Israeli and Palestinian. We cannot accept at face value reports of Palestinian deaths since they come from Hamas, a terrorist organization recognized as such by both the US and the EU.”

Israel fired artillery and mounted more air strikes on Friday against Palestinians in the Gaza Strip.

As hostilities entered their sixth day, with no sign of abating, the Israeli military said in a statement shortly after midnight that air and ground forces were attacking the Hamas-run enclave.

Although the statement gave no further details, Israeli military affairs correspondents who are briefed regularly by the armed forces said it was not a ground invasion, and that troops were firing artillery from Israel’s side of the border.

Residents of northern Gaza, near the Israeli frontier, said they had seen no sign of Israeli ground forces inside the enclave but reported heavy artillery fire and dozens of air strikes.

The number of Palestinians killed in Israeli attacks on the Gaza Strip has risen to 113, the Ministry of Health said.

The U.N. Security Council will publicly discuss the worsening violence by Israel on Sunday, diplomats said after the United States earlier objected to a meeting on Friday.

The sound of artillery fire and explosions echoed across northern and eastern parts of Gaza into early Friday morning. Witnesses said many families living in areas near the border quit their homes, some seeking shelter at United Nations-run schools.

At least 113 people were killed in Gaza, including 31 children, over the previous four days, Palestinian medical officials said. On Thursday alone, 52 Palestinians were killed in the enclave, the highest single-day figure since Monday. (Int’l News Desk)