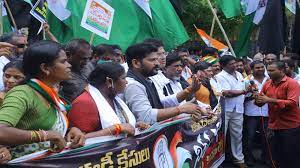 Hyderabad, June 13 (PMI): The State Congress party today staged a dharna in front of Enforcement Directorate (ED) office in the city protesting against service of notices to the party leaders Sonia Gandhi and Rahul Gandhi in connection with a case related to National Herald daily. The dharna was held coinciding with the appearance of Rahul Gandhi before the ED office in New Delhi on Monday. 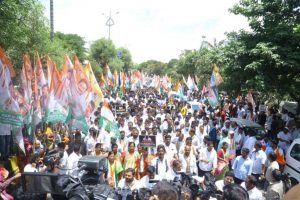 Speaking on the occasion, TPCC president A. Revanth Reddy warned the Union government that they would not be mute spectators if it insulted Gandhi family, which has sacrificed everything for the development of the country. He said the National Herald daily was founded for achieving freedom of the country and added that the first Prime Minister Pandit Jawaharlal Nehru launched the newspaper in 1937. He said Mahatma Gandhi, Jawaharlal Nehru and Sardar Vallabhbhai Patel had acted as pillars of the newspaper. He said his party leader Rahul Gandhi came to the rescue of the daily when it was facing losses and added that the daily was relaunched even after carrying a debt of ₹90 crore. He said the ED notices were served on the Gandhi family after finding out that the daily was exposing the corruption of BJP leaders.

Stating that both Rahul Gandhi and Sonia Gandhi were given a clean chit in the case, he said Prime Minister Narendra Modi government reopened case as he feared the victory of the Congress party in the next general elections. He said the people in the country were fed up with the Modi government, which was burdening them in an unprecedented manner by increasing prices of petrol and diesel.

Stating that sacrifices are possible only by the Gandhi family, he said Rahul Gandhi had sacrificed the post of Prime Minister although he had the opportunity to become as the PM of the country. He made it clear that the Gandhi family did not require power and money and added that the Congress party workers could alone mobilise ₹5,000 crore donations if the Gandhi family wanted it. He said they were holding similar protests in all the States in the country. He said they would teach a befitting lesson to all those who had insulted Sonia Gandhi and Rahul Gandhi. (PMI)