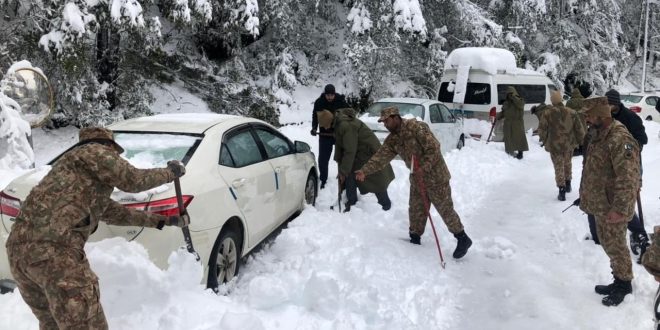 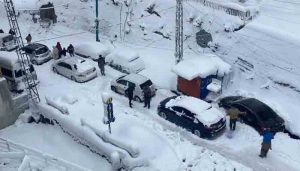 MURREE/ ISLAMABAD: At least 21 people froze to death after heavy snow trapped them in their vehicles as tens of thousands of visitors thronged Pakistan’s hill town of Murree.

The military was mobilized to clear roads and rescue people still trapped, Pakistan’s Interior Minister Sheikh Rashid Ahmed said in a video message on Saturday, adding: “At least 16 to 19 people died inside their vehicles.”

Prime Minister Imran Khan expressed shock over the “tragic deaths” of the tourists. “Have ordered inquiry and putting in place strong regulations to ensure prevention of such tragedies,” Khan said in a tweet.

Located about 50km (22 miles) north of the capital, Islamabad, Murree is a popular winter resort that attracts well over one million tourists annually. Streets leading into the city are often blocked by snow in winter. 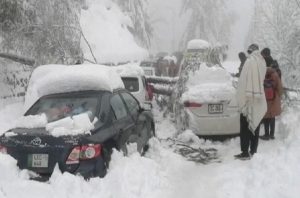 Snowfall, which began on Tuesday night, continued at regular intervals, attracting thousands of tourists. Because of the huge numbers of visitors, many families ended up getting stranded on roads.

“This is an example of systemic failure because according to reports, about 100,000 vehicles headed to the hill station, one that has narrow roads,” said Al Jazeera’s Kamal Hyder, reporting from Islamabad.

“There were warnings of heavy snow and that led to a total catastrophe because people were stuck in their vehicles, entire families. Their vehicles were buried under heaps of snow.”

Ahmed, the interior minister, said more than 1.2 metres (4 feet) of snow fell in the area overnight and all incoming traffic was blocked on Saturday. The minister said paramilitary troops and a special military mountain unit had been called in to help. 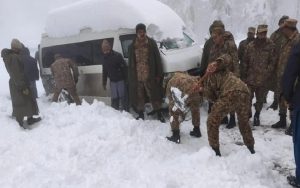 “Until then no vehicle or even people on foot are allowed to enter Murree except for the emergency and rescue vehicles and those bringing food for the stuck people,” he said.

Umar Maqbool, a local administrator, said the heavy snowfall hampered rescue efforts during the night and even heavy equipment brought in to clear the snow got stuck initially.

Officials gave no further details about those who died in their stuck vehicles but said they were working on both recovery and rescue operations. Food and blankets were distributed to the stranded tourists.

The Punjab province chief minister’s office said Murree had been declared a “disaster area” and urged people to stay away.