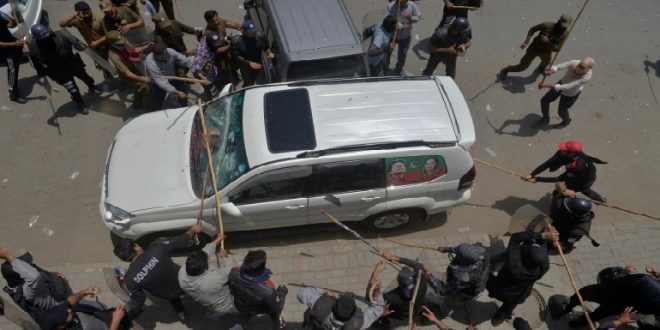 Clashes in Pakistan as defiant Imran begins march to capital 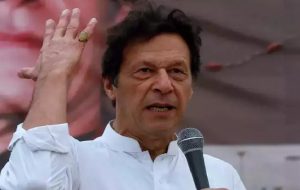 ISLAMABAD/ LAHORE/ KARACHI: Clashes have been reported in Pakistan after authorities blocked roads leading to the capital, where a defiant former Prime Minister Imran Khan’s party is planning to hold a major rally to demand the removal of the government and immediate general elections.

In the northeastern city of Lahore, police fired tear gas shells to disperse hundreds of PTI members who gathered at different points for the protest march.

Angry protesters pelted stones and threw tear gas shells back at the police before scores of them were taken into custody.

The government on Tuesday banned Khan’s planned rally in Islamabad after a policeman was allegedly killed by a PTI worker during police raids on the homes of the party’s members.

The PTI claimed that more than 1,000 members were arrested in overnight raids across northeastern Punjab province in an attempt to foil the march. 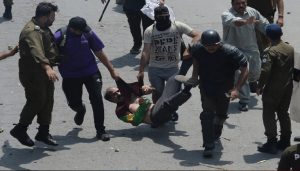 Authorities had placed dozens of shipping containers on major roads leading to the capital, about 270km (170 miles) northwest of Lahore.

They have also deployed additional police and paramilitary troops on highways and in Islamabad to stop the rally, with tractor-trailers parked across both lanes of traffic in several areas.

Khan began the march from northwestern Khyber Pakhtunkhwa province, which is governed by his party. The former leader urged supporters, especially young people, to remove the barricades to reach Islamabad “at any cost”.

“Would urge everyone to carry the Pakistan flag with them. This is a defining moment,” the 69-year-old leader tweeted.

Khan had already massed PTI leaders and thousands of his supporters in Peshawar, the capital of Khyber Pakhtunkhwa. From there, his followers must cross a bridge at the province’s border that the government has blocked, before assembling on the outskirts of Islamabad. 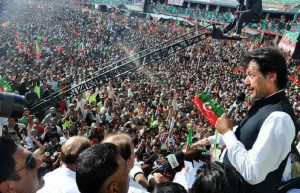 Interior Minister Rana Sanaullah said Khan will be arrested if the rally goes ahead.

Reporting from Islamabad, journalist Kamal Hyder said he saw dozens of PTI workers being arrested “just outside our office”.

“There are reports of scuffles in many Punjab cities between the police, despite the fact that the Pakistani constitution allows for peaceful protests, which is the fundamental right of the citizens,” Hyder said “but the government it seems has panicked and is overreacting despite the fact that there were court orders not to arrest or harass workers.”

Meanwhile, Pakistan’s Supreme Court was about to hear a petition to remove the blockades into Islamabad.

Authorities say that if Khan agrees to submit a written assurance that his rally will be peaceful and he will confine himself to a public park, the government would consider lifting its ban.

Khan was removed from office last month after losing a vote of no-confidence in parliament which he alleged was part of a US-backed plot and collusion with his successor Shehbaz Sharif, whose government has vowed a stern response if Khan violates the ban. 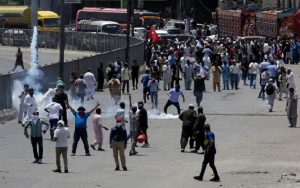 The cricket legend-turned-politician is demanding the dissolution of parliament and new elections, which are otherwise due in 2023. The government has rejected his demands.

Wednesday’s march has raised fears of major violence between supporters of Khan and security forces in a nation already battling an economic crisis.

Khan lost power in part due to his failure to rectify Pakistan’s dire economic situation, including its mounting debt, shrinking foreign currency reserves and soaring inflation.

With foreign reserves falling to $10.3bn, lower than two months of import bills – a fast-crashing Pakistani rupee and double-digit inflation, the political turmoil has compounded economic volatility in the country.

Sharif, who replaced Khan last month, has yet to take bold steps towards putting the economy back on track.

Talks are continuing in Doha between the government and the International Monetary Fund to resume a $6bn rescue package agreed in 2019, and are due to conclude on Wednesday.