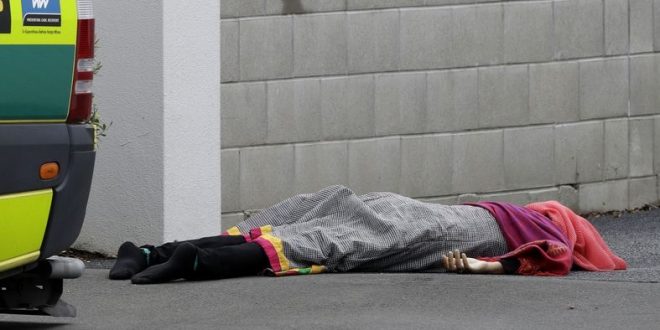 ‘THAT IS ANOTHER CHRISTIANITY ATTACK ON ISLAM’

CHRISTCHURCH: Multiple people are dead and one person is in custody after mass shootings in two Christchurch mosques, in what Prime Minister Jacinda Ardern has labelled “one of New Zealand’s darkest days”.

Police have confirmed they are responding to a “serious and the evolving the situation is … with an active shooter”.

“We have one person in custody and we are unsure if there are other people.

“The multiple fatalities are as far as we know, at two locations — a mosque at Deans Ave and another mosque at Linwood Ave Christchurch.

“Again we are unsure if there are any other locations outside of that area that are under threat.”

All Christchurch schools are in lockdown and a nearby students’ climate strike has been evacuated.

People in central Christchurch have been urged to stay indoors and report any suspicious behaviour immediately to authorities.

Ardern said either she or police were yet in a position to confirm numbers of fatalities and casualties.

“I would describe it as an unprecedented act of violence, an act that [has] absolutely no place in New Zealand,” Ardern said.

“This is not who we are.

“The people who were subject of this attack today, New Zealand is their home, they should be safe here.”

The mosques were reportedly busy at the time of the attacks due to Friday prayers.

Witness Len Peneha said he saw a man dressed in black enter the Masjid Al Noor mosque in the centre of the city at about 1:45 pm and then heard dozens of shots, followed by people running from the mosque in terror.

Peneha, who has lived next door to the mosque for about five years, said the gunman ran out of the mosque, dropped what appeared to be a semi-automatic weapon in his driveway, and fled.

Peneha said he then went into the mosque to try and help.

“I saw dead people everywhere. There were three in the hallway, at the door leading into the mosque, and people inside the mosque,” he said.

“It’s unbelievable nutty. I don’t understand how anyone could do this to these people, to anyone. It’s ridiculous.”

Janine Richmond, who lives nearby the mosque, said she heard about 20 gunshots.

“It started off quite slowly and then got very rapid,” she told NZ media.

TVNZ showed pictures of injured people being taken into a local hospital on stretchers.

Shrinivas Chandrasekaran, an analyst with the Bangladeshi cricket team currently touring in Christchurch said the entire Test team had been at the mosque at the time of the attack.

The entire team got saved from active shooters!!! Frightening experience and please keep us in your prayers,” Chandrasekaran wrote.

An ESPN cricket reporter shared a vision of the team walking quickly through a park.

An injured Arab man Mahmood told Messenger that was another deadliest Christianity an attack on a world most peaceful religion Islam and its followers while the attacker was reported allegedly an Australian citizen.