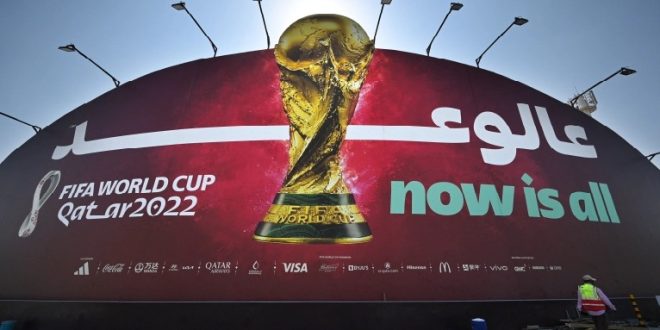 KUALA LUMPUR/ BEIJING: China may not be sending a side to Qatar, but Chinese businesses will have top billing as sponsors at the 2022 World Cup. 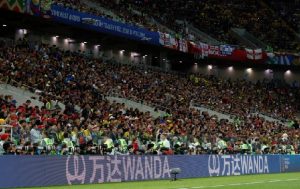 Chinese brands are the biggest sponsors of this month’s tournament even outspending the slate of American companies that includes iconic names such as Coca-Cola, McDonald’s and Budweiser.

China’s sponsors have ponied up $1.395bn for the competition, which runs November 20-December 18, surpassing the $1.1bn spent by US companies, according to Global Data, a London-based data analytics and consulting company.

Broken down on an annual basis, Chinese sponsorship is valued at $207m per year, compared with Qatari and US deals worth $134m and $129m, respectively, according to the data.

China’s corporate dominance at the competition reflects the aspirations of its brands to expand their recognition overseas to a level that matches their growing size and reach.

The rise of Chinese sponsors also parallels President Xi Jinping’s dream of turning China, which made its sole World Cup appearance in 2002, into a football powerhouse through ambitious plans and targets, such as increasing the number of schools with football pitches 10-fold by 2025. 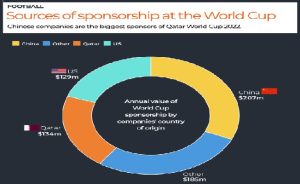 While the four Chinese sponsors of the 2022 tournament Wanda Group, Vivo, Mengniu Dairy and Hisense have relatively low profiles outside their home country, they are huge enterprises with multibillion-dollar revenues and thousands of employees.

Wanda Group, an industry-spanning conglomerate founded in 1988, and Mengniu, one of China’s largest dairy producers, have each made the Fortune 500 list several times.

“The World Cup works for Chinese companies both outside but also inside China as soccer has a large following with Chinese audiences,” Martin Roll, a branding expert and consultant based in Singapore, told media.

“It signals strongly that these Chinese brands are playing at global scale, and showcasing that to Chinese audiences play an important role. Being a sponsor and a marketing partner of the World Cup is only for a selected few brands that can afford it, so just being part of it, is a testimony to the aspirations of the Chinese brands.”

Chinese companies hope an association with the beautiful game may help them shed negative perceptions about the “made in China” tag, said Paul Temporal, a branding expert at Oxford University’s Saïd Business School. 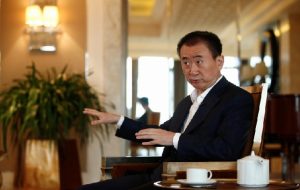 “Chinese brands have learned from western counterparts that, although expensive to gain access to the world’s best events, sports sponsorships do deliver long-term results both for the brand owners and the nation. Brands that go global are brand ambassadors for China and if successful in terms of global market share, can have a positive effect on national brand image.”

The biggest Chinese sponsor in Qatar by far is Wanda Group, one of the seven official FIFA Partners, the highest sponsorship tier alongside Coca-Cola, Adidas, Hyundai, KIA, Qatar Airways, QatarEnergy, and Visa.

The Beijing-based conglomerate, which has investments in real estate, entertainment, media, manufacturing and financial services, has committed $850m as part of a 15-year deal that covers all World Cup events up until 2030, according to Global Data. (Al Jazeera)