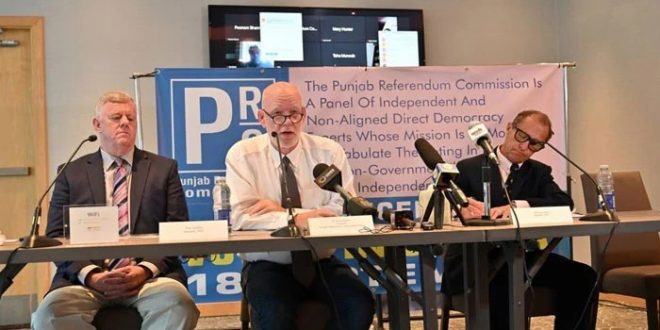 TORONTO/ NEW DELHI: Prime Minister Justin Trudeau’s government has said it cannot stop Canadian Sikhs from expressing their views through Khalistan Referendum voting as long as the process is peaceful, democratic and within the legal parameters of the Canadian laws. 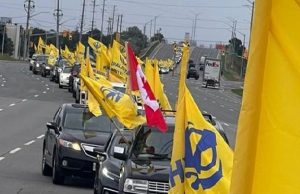 Commenting on the situation that has unfolded in the wake of an attack on a Hindu temple and the poster of a revered Khalistani Sikh leader, a Canadian gov’t official said that Canadian nationals have every freedom to express their views in every manner possible as long as it follows the Canadian laws on right to freedom of expression and right to free speech and assembly.

The official spoke after consistent lobbying by the Indian gov’t with Prime Minister Justin Trudeau’s government against the rising pro-Khalistani sentiment in Canada – home to over one million Sikhs and a high-profile campaign for Khalistan being run by the pro-Kahlistani and pro-separatist group Sikhs For Justice (SFJ).

India has tried to apply diplomatic pressure on the Canadian gov’t ahead of the Khalistan Referendum voting on 18 September at the Gore Meadows Community Center in Brampton, Ontario. Hundreds of Sikhs gathered at the centre on Saturday to make preparations for the voting on Sunday, a move that is set to pitch India against the Canadian government.

The Canadian gov’t has said that its position on the united India and its status will not change; that it will not recognize a referendum run by the advocacy group but it has stressed that at the same time it cannot take away right of Canadians to get involved in any kind of political activity and demand their rights through peaceful and democratic means. 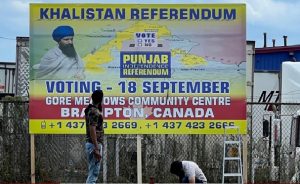 Gurpatwant Singh Pannun, the Counsel General of Sikhs for Justice and a New York Attorney, said Indian government has used every trick to paint Sikhs in a bad light before the western world but the democratic gov’ts have refused to come under Indian pressure because they recognize that Khalistan Referendum seeks to assess the desire for an independent Khalistan and once the voting process is completed then the case will be presented before the United Nations.

Gurpatwant Singh Pannun said the SFJ and other pro-Khalistan organizations have no links with violence. He commented: “We are for ballot, not bullet. India hates our approach to peace.”

Jatinder Singh Grewal, the policy director of SFJ, said: “The issue of Khalistan Referendum falls well within the right of freedom of expression, which is a fundamental right enjoyed by all Canadians.  India has a difficult time understanding this principle as they have systematically criminalized political decent within their state and today countless Sikhs who wish to exercise their right to self-determination are labelled as `terrorists.  And now India is trying to export this system to the west but the Canadian Charter of Rights and Freedom guarantees this right and no amount of Indian pressure will change this reality.” 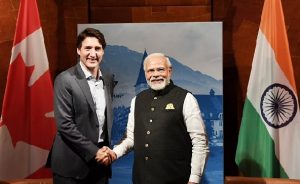 The issue of Khalistan Referendum campaign is not the first the Indian gov’t has sparred with the Canadian govt. The position taken by the Canadian gov’t on Khalistan Referendum is set to anger India which has felt perturbed at the scenes of thousands of Sikhs coming out in the western capitals demanding freedom from India and the establishment of an independent state of Khalisatn. The issue of Sikh separatism was a major bone of contention of Prime Minister Trudeau’s trip to India a few years ago. The Indian gov’t has openly accused the Canadian authorities of showing leniency towards Khalistanis in Canada. Indian gov’t has said on record that Canada needed to prevent people from misusing their right to freedom of expression to “incite violence and glorify terrorists as martyrs” but the SFJ has responded by saying that allegation of incitement of violence is without any merit.

Earlier this week, the Indian authorities launched a strong protest with the Canadian gov’t after BAPS Swaminarayan Mandir in Toronto was vandalized with anti-Indian and pro-Khalistan slogans written at the entrance ahead of 18 September Khalistan Referendum voting which is set to attract tens of thousands of Sikhs. 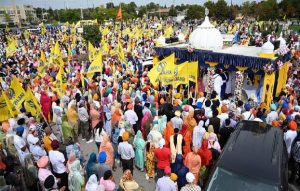 The Indian government has condemned the vandalism at the Mandir, calling on the Canadian Prime Minister to take action against the suspected Khalistani activists.

“We strongly condemn the defacing of BAPS Swaminarayan Mandir Toronto with anti-India graffiti. Have requested Canadian authorities to investigate the incident and take prompt action on perpetrators,” the Indian High Commission tweeted.

The vandalism incident comes after the local police announced it has arrested an Indo-Canadian man for tearing Sikh leader Jarnail Singh Bhindranwale’s banner in the city of Caledon, Ontario, ahead of the 18 September Khalistan Referendum. In response to the attack, over 500 Sikhs protested outside the Indian consulate in Toronto alleging that the Indian gov’t was behind the attack on the posters of nationalist Sikh leader Jarnail Singh Bhindranwale who is regarded as a martyr, saint and icon of Khalistan movement. (Geo News)