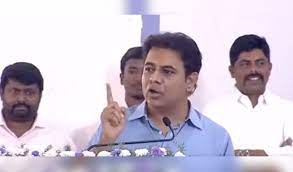 Rajanna-Sircilla/Hyderabad: Municipal Administration Minister KT Rama Rao on Tuesday ridiculed BJP State leaders for criticising the State government schemes, even as the BJP government at the Centre was presenting award after award for Telangana’s performance at the national level.

Either BJP leaders at the Centre or those in the State BJP unit were brainless as the former was appreciating Telangana’s performance with awards while the latter were mindlessly criticising the same schemes, he said, pointing out that BJP-ruled States including Maharashtra and Karnataka were sending teams to learn from Telangana’s schemes.

The recent BRS victory in the Sircilla CESS election was just a trailer, he said, adding that the full movie would come for the BJP in the ensuing Assembly elections in the State. The BRS victory march would start from Sircilla and the party flag would be hoisted in the Karimnagar parliament constituency as well as across the State, he said, pointing out that despite BJP distributing money, voters in Sircilla had 15 directors supported by the BRS party to the CESS.

Participating in the swearing in ceremony of the newly elected CESS governing body and later at the Rythu Kruthagnatha Sabha, Rama Rao said the BJP had done nothing for Telangana and reiterated his challenge that he would resign from his post if BJP leaders proved him wrong on the fact that Telangana had contributed Rs 3.68 lakh crore to the nation in the last eight years and received only Rs 1.68 lakh crore by way of tax devolution from the Centre.

“Neither the BJP nor Prime Minister Narendra Modi have done anything for Telangana. They keep appreciating and emulating our schemes, but do not extend any support. They keep spreading lies and hatred to mislead our youth, which should be strongly countered,” he said, pointing out that the BJP did not donate even Rs 10 for the Sri Rajarajeswara Swamy temple at Vemulawada.

Raising strong objections to BJP State president Bandi Sanjay terming Prime Minister Modi a God, Rama Rao demanded to know on what basis was this. “Modi is God for whom and for what granted by him? Should we treat him as God for increasing the LPG and fuel price or not sanctioning any educational institution to Telangana in the last eight years; for bringing Farm Laws that killed over 700 farmers or not approving hike in ST reservations proposed by the Telangana government?” he asked.

During his eight-year tenure, Modi had doubled India’s debts from that accumulated during the tenure of all the previous 14 Prime Ministers. Modi was not inclined to waive off farm loans taken by farmers, but was willing to waive off loans worth over Rs 12 lakh crore for corporate companies.

The State government on the other hand, had deposited Rs 65,000 crore in the bank accounts of 66 lakh farmers under Rythu Bandhu, he said and appreciated Choppadandi MLA Sunke Ravishankar for handing over Rs 5 lakh Rythu Bima insurance to family members of a deceased farmer, who was a BJP worker.

BJP MPs including Bandi Sanjay and union Minister G Kishan Reddy had failed completely to get funds for Telangana and were fit for nothing but to carry the footwear of their Gujarat bosses, he said, also ridiculing at statements by BJP leaders over claims of Modi stopping the Russia-Ukraine war, when he was actually not even capable of addressing border disputes between BJP-ruled States like Karnataka, Goa and Maharashtra.