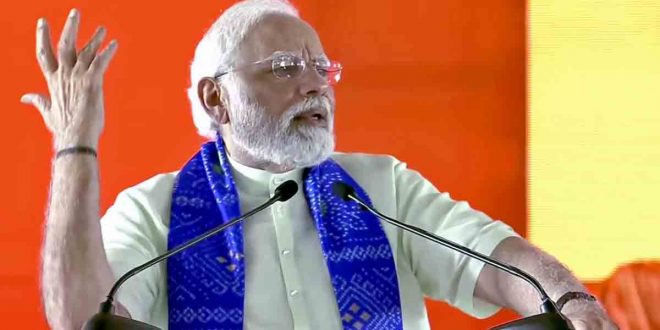 BJP to hold massive public meeting at Ramagundam on Nov.12

Hyderabad, Nov.5 (PMI): The state unit of BJP has decided to hold a massive public meeting at Ramagundam on 12th of this month. The meeting will be addressed by Prime Minister Narendra Modi after dedicating the Ramagundam Fertilizers company limited to the nation. The party is planning to mobilise huge number of people for the public meeting. It is planning to bring farmers to the meeting in large numbers. The party is targeting to mobilise one lakh people for the public meeting .

Speaking on the occasion, Bandi Sanjay said that one lakh people should be mobilised for the public meeting as it is being held in Ramagundam industrial area. He said that the farmers of the three districts should be in large numbers in the meeting . He said that all the party leaders should work together with complete coordination in the issue of the mobilisation of the public  and added that different types of decorations should be made to welcome the prime minister . He said that all the leaders should take the visit of the PM in a prestigious manner and added that they should also explain the benefits of the restoration of the Ramagundam factory at a cost of ₹6120 crores  to the farmers.