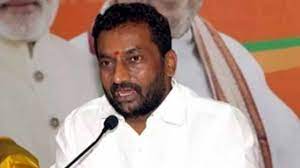 Hyderabad, Oct.28 (PMI): The sensational “cash for MLA” scam was taking turns in the State with each passing day. In a fresh development, BJP MLA M. Raghunandan Rao lodged a complaint with ED on the issue. He visited the office of the ED and submitted his complaint along with an audio recording of one TRS MLA and accused.

In his complaint, Rao told the ED officials that it was learnt that the accused tried to offer ₹400 crore in the scam. He said the police, however, did not talk about the money seized and the accused. He told the ED officials that the local police had failed to prove the money transactions involved in the scam. He also told the ED that an ACB Court rejected the plea of the police to send the accused to judicial remand. The complainant said the ruling TRS leaders were levelling baseless allegations against the State and national leadership of the party. He said carrying out ₹2 lakh and above amounts to money laundering.

Speaking to media persons later, Rao said he had urged the ED to inquire into the claims of the ruling TRS party MLA Pilot Rohit Reddy that he was offered ₹100 crore. He said the ED officials had recorded his statement in the issue. (PMI)