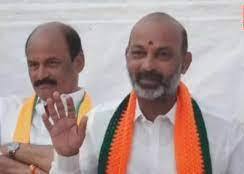 In a statement, Bandi Sanjay posed a series of questions to the CM on the issue. Stating that the ruling TRS party candidate from Munugodu Koosukuntla Prabhakar Reddy was the MLA from the constituency in KCR’s first term as the CM between 2014-2018, he asked the CM as to how much he developed the constituency in his first term? He dared the CM for a debate on the issue of the development of munugodu in the overall nine year rule of the CM. He said that he was ready to hold a public debate with their party candidate Komatireddy Rajagopal reddy and asked the CM to send his party candidate Prabhakar Reddy for the debate.

Commenting on the imposition of GST on handloom products, he said that the central government was not imposing any kind of GST up to a turnover of ₹40 lakh and alleged that the state government was imposing the GST for a turnover of ₹20 lakh on the same products and sought an answer from the CM on the issue . He asked the CM as to why he did not hold elections for weavers society in the last eight years? He demanded the CM to tender his apologies to the people of Munugodu for lying to them. (PMI)