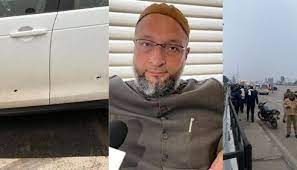 Asaduddin Owaisi says his car fired upon in UP, one suspect arrested

Police are examining the CCTV footage and have apprehended one suspect in the matter. 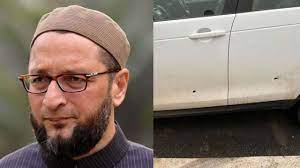 New Delhi-Feb ;3; AIMIM chief Asaduddin Owaisi’s MP vehicle was today fired at by unknown assailants when the parliamentarian was returning from Uttar Pradesh. The incident occurred when Owaisi was on his way to Delhi from Kithaur, Meerut. The MP tweeted that four rounds of bullets were fired targeting his vehicle, leading to the puncture of the tyres. He had to then continue his journey in another vehicle.

The assailants, numbering 3-4, fled immediately after the incident leaving the weapons, the Lok Sabha MP from Hyderabad said, adding “we are all safe”. Owaisi also tweeted a picture of the vehicle that bore two bullet marks.

Speaking to ANI after the incident, Owaisi said that police have arrested one of the shooters and recovered the weapons. He also urged the Election Commission to probe the matter. “I think we were being followed by the attackers. Police have recovered the arms and arrested one shooter. I request the EC to investigate the matter. It’s the responsibility of the state and central governments to probe the matter,” he added.