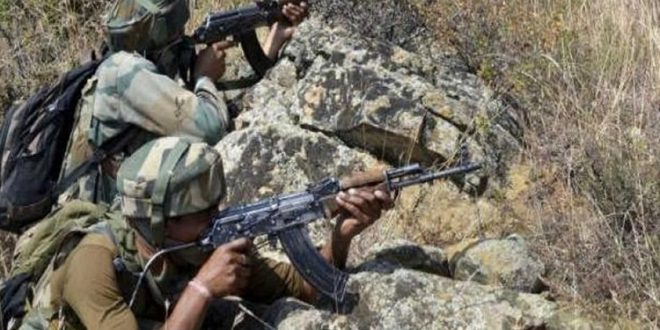 The Indian Army destroyed five forward posts of Pakistan in a befitting retaliation to firing from across the border in Rajouri and Poonch districts of Jammu Division last night.

A Defence spokesperson said, Pakistani troops resorted to indiscriminate firing and shelling with heavy calibre weapons in 12 to 15 places in the twin border districts.

The Pak troops were also seen firing mortars and missiles from civilian houses, using villagers as human shields. The spokesperson said, the Indian troops retaliated strongly and caused a number of casualties to the Pak Army. However, in the exchange of fire, five Indian soldiers were injured. Two of them were taken to Military Hospital and their condition is stable.

AIR correspondent reports that a number of Pakistan Army personnel were killed and injured while their five posts were destroyed across line of Control in Sunderbani Palling ala sector last evening in retaliatory firing and shelling by the Indian side  while a Ranger was killed and six others were injured across Kanachak sector on the International border in Jammu district . In view of heightened tension between India and Pakistan amidst heavy exchange of fire along line of Control in Rajouri and Poonch the respective district administrations have ordered closure of all schools within a radius of  five kilometers from Line of Control.

All schools located within five kilometres from LoC in Rajouri district are closed today.

Meanwhile, Indian Air Force jets continued hovering over Srinagar and Budgam district maintaining a vigil following their yesterday’s non-military pre-emptive air strikes at the biggest terror camp of Jaish-e-Mohammed in Balakot at Khyber Pakhtunkhwa in Pakistan. A large number of terrorists, trainers and senior commanders of the group were eliminated in the strike by the Air Force.

External Affairs Minister Sushma Swaraj spoke to Foreign Ministers of the US, China, Singapore, Bangladesh and Afghanistan on the strike.

Foreign Secretary Vijay Gokhale and other Secretaries briefed the foreign envoys, including those of P5 nations – China, France, Russia, UK and US – during the course of the day.