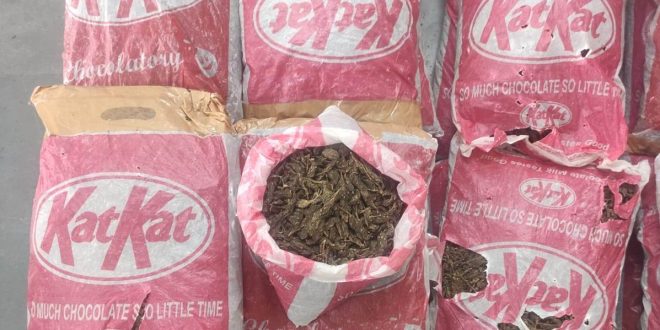 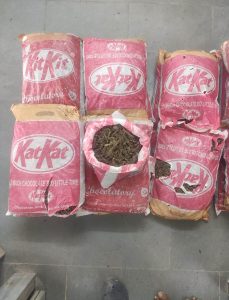 Hyderabad De13;2021(PMI)As a part of eradication of Ganja menace from the Telangana State, Medchal Police along with a team of SOT Balanagar, Cyberabad has gathered valuable information about the transportation of Ganja in commercial quantity from Vizag of AP to Akola of Maharastra and arrested a gang of 3 members who are illegally transporting the illegal drug in a tactful manner.

DETAILS OF THE ACCUSED:

The Accused person Pentya chowhan who is financier and organizer of ganja transport has convinced 1) Karan Nana Jadhav, 2) Devki Chouhan, 3) Indu Mohithe and 4) Usha Chouhan  to transport Ganja from Vishakapatnam to Akola for a payment of Rs 5,000/- for each. As per their plan on 01-12-2021 A1 to A5 started from Akola and went to Annavaram by train they collected 30 bags of Ganja weighing abour 62.595 Kgs from One  Pangi Mallesh R/o Vishakapatnam  and packed in a such a manner, that people believe them as the accused A1 to A5 are nomads and moving one place to other along with their luggage bags contains household articles with ladies and on 09-12-2021 the accused persons started their return journey to Akola from Annavaram by travelling in various lorries/DCMs on road and on 11-12-2021 at 2100 hrs they reached Patanchervu and got down at RTC Bus stand area where Pangi Mallesh got suspicion that the police might have observed them, as such Pangi Mallesh and Usha Chouhan fled away from there and instructed Karan Nana Jadhav, Devki Chouhan and Indu Mohithe to reach Akola through Medchal highway, as such the accused A2 to A4 reached Medchal on 12.12.2021 early hours and while they are on the way to move to their native place Akola, the accused A2 to A4 were apprehended by the Police Medchal and SOT Balanagar Team and seized Total of 62.595 Kgs of Ganja from their Possession. The seized contraband ganja is in commercial quantity. As such the offence committed by the accused is punishable with rigorous imprisonment for a term which shall not be less than 10 years, but may extent to 20 years.

The above operation was made under the supervision of Smt. P.V.Padmaja DCP Balanagar and Sri. G. Sandeep, DCP SOT Cyberabad. The initiation taken and efforts made by inspector of Police B. Jemes Babu and staff of SOT Balanagar Zone along with Medchal Police in apprehending this illegal drug transporting gang. The good work done by above officers is highly appreciated and they will be rewarded suitably.

Note: Police are very vigilant to eradicate ganja menace from the state. In this regard public support is very much needed, as such public are requested to share any information to concern police to make the Telangana state free from ganja menace.