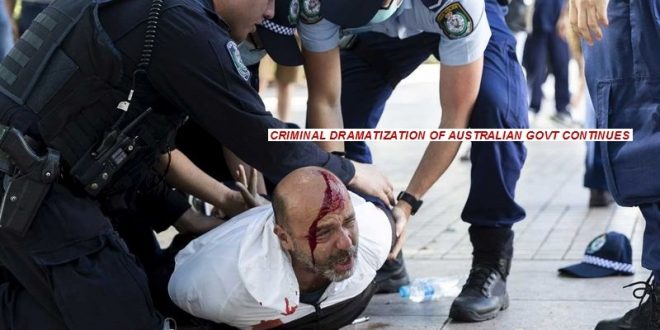 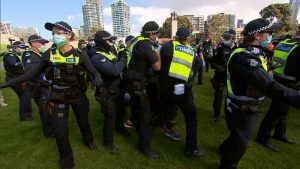 MELBOURNE/ SYDNEY: The criminal dramatization of Australia’s present rulers is not only being continued traditionally but also despite the wishes of millions of Aussies and beside learning a basic and primary childhood lesson from Pakistan regarding overcoming coronavirus pandemic neither the Liberal and its coalition parties nor the Federal as well as States regimes are ready to keep save themselves with world worst insults and complete failure while if the situation remains same and inhuman, illegal and unethical acts and practices will remain continue, no one would stop Australia to convert into Syria or Afghanistan, victims, experts and sources challenged and claimed.

More than a dozen arrests have been made in Melbourne as anti-lockdown protests take place in the city.

Anti-lockdown protesters had been warned by authorities to expect a heavy police presence if they gathered for “Freedom Day” rallies in Melbourne today.

A total of 17 people were arrested in Victoria and 160 infringement notices were issued.

Of the arrests, 14 were for breaching Chief Health Officer’s directions and one was for assaulting police. 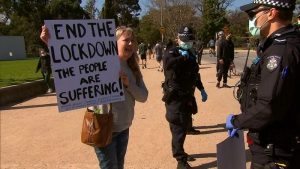 Two men were arrested for allegedly assaulting police and a woman arrested for failing to comply with a move on direction.

In total, 14 people were arrested across two protests in NSW in Sydney and the Northern Rivers town of Byron Bay.

A total of 81 penalty infringement notices were issued across the state at a cost of $1000 each.

Victoria Police said they were “disappointed” by the turnout.

“Despite all the warnings, it was disappointing to see individuals turn out to protest in the city today, putting the lives of Victorians at risk,” Victoria Police said in a statement.

“Police responded to protest activity across the CBD today, where approximately 200 people attended the Shrine of Remembrance and then moved on to Albert Park Lake. 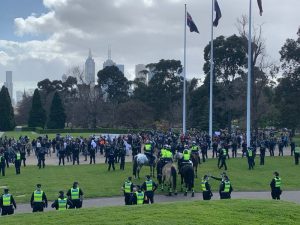 The Shrine of Remembrance in Melbourne was an early gathering point. Protesters have since moved on to Albert Park.

It is estimated around 200 people had gathered at the Shrine by late morning.

A number of police were on horseback as they attempted to disperse crowds.

In his media conference earlier today, Victoria Premier Daniel Andrews warned that any protests could jeopardize the route out of lockdown. 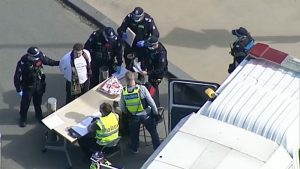 Earlier today a number of protestors indicated to the Today Show they no longer intend to attend over fears that any action could lead to an extension of the Stage Four lockdown when a road map to the easing of restrictions is revealed by Premier Daniel Andrews tomorrow.

Despite all the warnings, it was disappointing to see individuals turn out to protest in the city today, putting the lives of Victorians at risk. 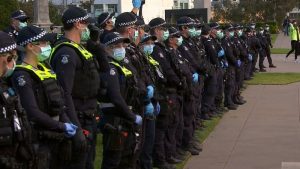 Police responded to protest activity across the CBD today, where approximately 200 people attended the Shrine of Remembrance and then moved on to Albert Park Lake.

14 of the arrests were for breaching the Chief Health Officer directions, while one was for assaulting police. They are all currently in custody assisting police with enquiries.

As a result of the protest, a police officer received lacerations to the head after being assaulted by an individual who was in attendance.

Our investigations into this protest will continue, and we expect to issue further fines once the identity of individuals has been confirmed.