Hyderabad, Dec.31 (PMI): Senior IPS officer M. Anjani Kumar today took over charge as the incharge DGP of the State. He received the charge from DGP Mahender Reddy, who retired on Saturday. Several senior IPS officials took part in the charge-taking ceremony and congratulated Anjani Kumar on the occasion.

The State government issued orders appointing Ajani Kmar as the incharge DGP in view of the retirement of Mahender Reddy. Kumar is the 1990 batch IPS officer and discharged several crucial responsibilities. He started his career as an ASP of Jangaon and later went on to work as the SP of Mahbubnagar, Prakasam and Guntur districts in the undivided Andhra Pradesh State. He also worked as the member of Peace Protection Force of the United Nations for one year in the year 1998. Kumar received the UN peace medal for two times in recognition of his services. He also worked as the chief of counter intelligence cell, Nizamabad range DIG, Hyderabad Additional CP, CP and as ACB DG. 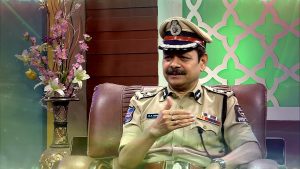 Another IPS officer of 1997 batch, Devendra Singh Chouhan took charge as the Commissioner of Police of Rachakonda police Commissionerate. He received the charge from the outgoing IPS officer M M Bhagavath. Bhagawath has been transferred and posted as Additional DG of CID. Chouhan had worked in Excise department and Central services in the past. He is an M.Tech graduate and belongs to Uttar Pradesh. (Press media of india)