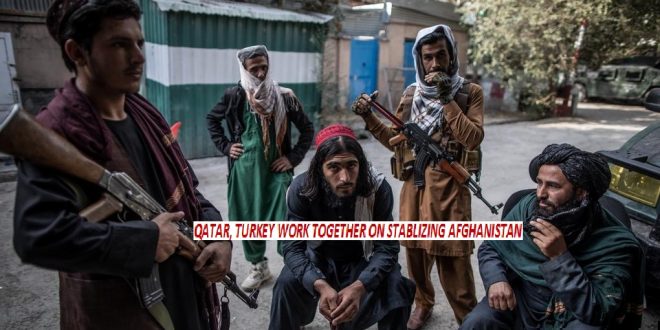 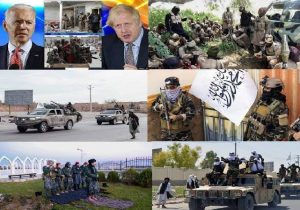 WASHINGTON/ LONDON/ BRUSSELS/ KABUL/ ISLAMABAD/ ISTANBUL:Th e United States, the European Union and 20 other countries have condemned the Taliban over allegations of summary killings of former police and intelligence officers in Afghanistan.

The statement on Saturday came after Human Rights Watch (HRW) published a report documenting the killing or disappearance of at least 47 members of the Afghan National Security Forces.

The countries said they were “deeply concerned” by the allegations and underlined that the “alleged actions constitute serious human rights abuses and contradict the Taliban’s announced amnesty” for former Afghan officials.

They called on the Taliban “to effectively enforce the amnesty for former members of the Afghan security forces and former Government officials to ensure that it is upheld across the country and throughout their ranks,” and urged prompt and transparent investigations into the reported killings. 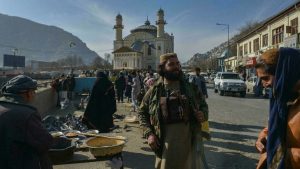 The countries include Australia, Canada, France, Germany, Japan, the United Kingdom and Ukraine.

The Taliban took power in Afghanistan in August as the US-backed government in Kabul collapsed in the wake of American troops leaving the country.

The armed group, keen to gain international recognition, has pledged its rule will be different to its previous time in government in the 1990s, which included public stoning, limb amputations of alleged criminals and a ban on women’s education but the new government has continued to carry out violent punishments, and the United Nations has expressed concern about “credible allegations” that the Taliban has carried out reprisal killings since their victory.

In its report, HRW said Taliban leaders have directed surrendering security forces to register with authorities in order to be screened for ties to certain military or Special Forces units, and to receive a letter guaranteeing their safety. 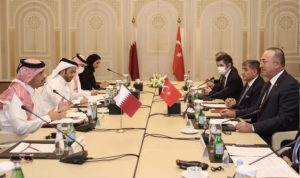 “However, the Taliban have used these screenings to detain and summarily execute or forcibly disappear individuals within days of their registration, leaving their bodies for their relatives or communities to find,” HRW said.

The group said its research indicates the Taliban have killed or forcibly disappeared more than 100 former members of the Afghan security forces in the provinces of Ghazni, Helmand, Kunduz and Kandahar provinces.

It also noted that the Taliban had announced the establishment of a commission to investigate reports of human rights abuses, corruption, theft and other crimes but said the commission had not announced any investigations into any reported killings.

“The Taliban’s unsupported claims that they will act to prevent abuses and hold abusers to account appears, so far, to be nothing more than a public relations stunt,” it said.

The Taliban have repeatedly denied sanctioning attacks on former members of the security forces and in late November, it said it had formed a commission to purge “people of bad character” from their ranks. 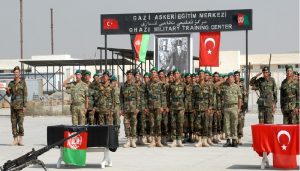 In an audio recording, Taliban deputy chief and Afghan Interior Minister Sirajuddin Haqqani appealed to “our brothers to cooperate with the commission and don’t protect or support any individual of bad character on the basis of personal friendship”.

No country has formally recognized the Taliban government yet, while billions of dollars in Afghan assets and funds abroad have been frozen, even as the country faces severe economic and humanitarian crises.

US officials held talks with Taliban representatives in Qatar earlier this week, and expressed deep concern over human rights abuses and urged the group to provide countrywide access to education at all levels for women and girls.

Shortly afterwards, on Friday, the Taliban released a decree on women’s rights saying women should not be considered “property” and must not be forced into marriage.

Qatar’s foreign minister has reiterated his country’s position on addressing the situation in Afghanistan, saying Doha will continue to work towards enhancing humanitarian and economic efforts in the war-torn country. 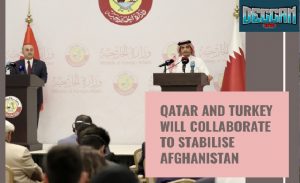 In a joint press conference with his Turkish counterpart in Qatar’s capital Doha on Monday, Sheikh Mohammed bin Abdulrahman Al Thani said Qatar will work with ally Turkey and Taliban officials to ensure that Kabul’s international airport, the site of chaotic scenes after the Taliban takeover, continues to function.

Sheikh Mohammed was speaking to reporters alongside Turkey’s FM Mevlut Cavusoglu after the pair met as part of the seventh annual Qatar-Turkey Strategic Dialogue.

The two-day meeting, co-chaired by Turkish President Recep Tayyip Erdogan and Qatar’s Emir Sheikh Tamim bin Hamad Al Thani, is expected to end with the signing of at least 12 MoUs on Tuesday across various fields including the military, health, tourism, and education sectors, among others.

Cavusoglu said Turkey was seeking to work for “peace and stability” in Afghanistan as he urged the international community to engage in dialogue with the Taliban and called on them to “differentiate” between the political and humanitarian side of things. 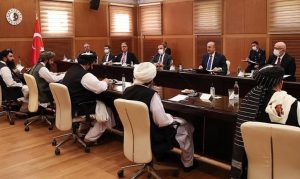 Qatar and Turkey have a strong and strategic relationship at political, economic and military levels.

The Supreme Strategic Committee was established in 2014 to enhance relations between the two countries.

On Monday, the two ministers reaffirmed their strong ties, telling reporters that they had reviewed various regional and international issues and discussed steps that would further cement relations.

Among the regional issues discussed was the ongoing conflict in Libya where Qatar and Turkey backed the UN-recognized government in the west of the country.

The two officials also discussed the war in Syria, saying a “political solution” is urgently needed before Syrian President Bashar al-Assad’s government can be invited to rejoin the Arab League. 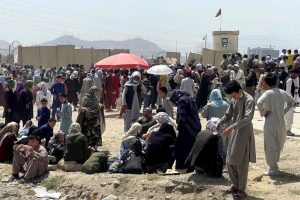 There is “no sense” in normalizing ties with Syria without it first taking serious steps towards a “political solution”, Sheikh Mohammed said.

“I don’t think we are in a position to offer him [Assad] a free pass to come to the Arab League,” he said, a statement that Cavusoglu agreed with.

The absence of a political solution will “embolden this regime to continue its aggression on Idlib”, he said, referring to the last rebel-held enclave in northwestern Syria on the border with Turkey – which backs several opposition groups.

A key example of the two countries’ strong ties is the presence of a Turkish military base in Qatar, which houses some 5,000 troops.

In June 2017, Saudi Arabia, the UAE, Bahrain, and Egypt imposed a land, air and sea blockade against Qatar. At the time, Erdogan dubbed the military base “the symbol of brotherhood, friendship, solidarity and sincerity”. 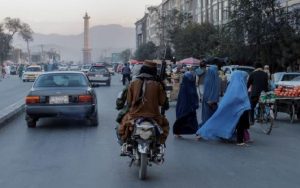 Turkey stepped up the export of essential goods to Qatar throughout the blockade to replace products that used to come through the land border with Saudi Arabia or through UAE’s Jebel Ali Port.

The seventh annual meeting comes at a time when Turkey is attempting to bolster its role in the region, and amid an economic crisis that has been exacerbated by the coronavirus pandemic.

Erdogan is expected to visit the UAE in February next year and has said in recent weeks that Ankara is planning to rekindle ties with Egypt and Saudi Arabia. (Al Jazeera)