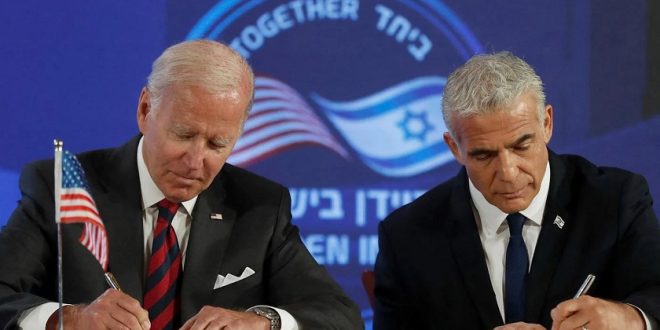 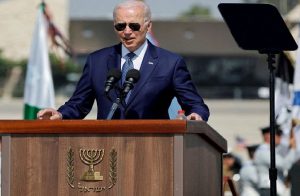 The two leaders signed the statement earlier after holding a one-on-one meeting on Thursday morning in West Jerusalem on the second day of Biden’s four-day Middle East tour, followed by a virtual summit with the leaders of India and the United Arab Emirates.

The statement says that the US will use “all elements of national power” available to it to deny Iran the ability to arm itself with nuclear weapons.

The joint declaration also includes a pledge by Washington to continue US military aid to Israel.

A record 10-year $38bn aid package was signed in 2016 under the administration of former US President Barack Obama when Biden was vice president.

Speaking at a news conference following the signing, both Biden and Lapid spoke of their support for the US-Israeli relationship, and the perceived threat from Iran.

“The only way to stop a nuclear Iran is if Iran knows the free world will use force,” Lapid said. 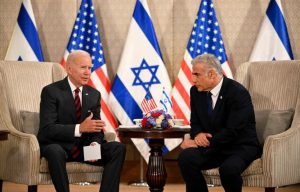 Biden, meanwhile, said that he believed diplomacy was the best way to prevent Iran from achieving nuclear weapons but reiterated what he said was a “guarantee” to provide security for Israel.

However, the declaration is relatively symbolic and more of a reaffirmation of the US and Israel’s opposition to Iran’s nuclear ambitions. Talks between Iran and Western powers to restore a 2015 nuclear deal have not progressed for months, with Tehran and Washington blaming each other for the stalemate.

After the meeting between Biden and Lapid concluded, the Israeli prime minister told reporters that the two had “discussed the Iranian threat”.

“There will be no nuclear Iran,” Lapid added.

“It’s nothing new,” said Al Jazeera’s Stefanie Dekker, reporting from West Jerusalem. “It’s the reaffirming of the commitment of the two countries, of the American commitment to Israel’s security and that both Israel and the United States will work to ensure that Iran does not acquire a nuclear weapon.”i 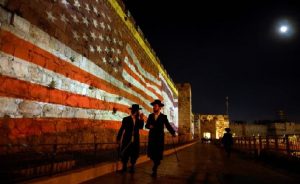 The Iranians insist that their nuclear program is peaceful and that they have no intention of building a nuclear bomb.

Israel is widely believed to have its own nuclear weapons but has never publicly confirmed it.

Biden arrived in Israel on Wednesday on his first tour of the region since taking office in 2021.

Arriving on Air Force One at Ben Gurion Airport in Tel Aviv, Biden was warmly greeted by Israeli officials and in a speech, described the US’s connection with the country as “bone-deep”.

“You don’t need to be a Jew to be a Zionist,” said Biden in his opening remarks. “The connection between the Israeli and American people is bone deep … I am proud to say that US relations with Israel are deeper and stronger than they have ever been.”

The US leader also reiterated his support for a two-state solution to the Israeli-Palestinian conflict but did not mention Palestinians by name.

In a speech, Lapid described Biden as a “great Zionist”. 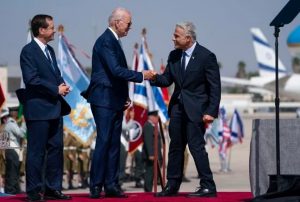 “Your relationship with Israel has always been personal,” Lapid said, calling Biden “one of the best friends Israel has ever known”.

Biden will head to the Israeli-occupied West Bank on Friday to briefly meet with Palestinian Authority President Mahmoud Abbas in Bethlehem, before travelling to Saudi Arabia later in the day.

Biden said the visit to the kingdom was an opportunity to reassert US influence in the Middle East.

The trip will involve Biden taking an unprecedented direct flight from Israel to Jeddah for talks with Saudi officials and to attend a summit of Gulf allies.

In an interview with the Israeli Channel 12 news outlet on Wednesday, Biden said that the normalization of ties between Saudi Arabia and Israel would “take time”.

Washington has been pushing for the two countries to formally normalize relations, but, while some agreements, such as allowing Israeli flights to fly over Saudi airspace, could occur, Riyadh has continued to stress that it will not recognize Israel until a Palestinian state is created. 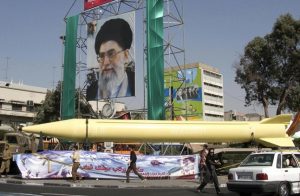 In response to a question on the potential agreement to allow Israeli flights over Saudi airspace, Lapid told reporters at Thursday’s news conference that he hoped Biden would be able to negotiate the deal during his trip to Jeddah.

Small-scale protests are expected to take place in Bethlehem and Ramallah in opposition to Biden’s visit and US policies towards Palestine.

While the US reiterated its support for the two-state solution in the joint Biden-Lapid statement, the US president has done little to reverse measures taken by his predecessor, President Donald Trump, including the opening of a US embassy to Israel in Jerusalem.

US-Palestinian ties have also been strained recently by the killing on May 11 of Al Jazeera correspondent Shireen Abu Akleh.

The journalist was shot by Israeli forces while reporting on Israeli military raids in Jenin in the occupied West Bank. 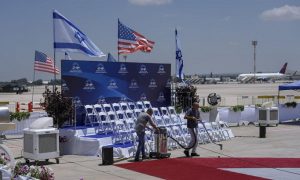 Despite the United Nations confirming witness testimony with its conclusion that Abu Akleh was killed by Israeli fire, a US review of its citizen’s death only found that Israel was likely behind the killing, but that there was no evidence it was intentional.

Abu Akleh’s family has voiced “outrage” over the Biden administration’s “abject response” to her killing and accused the US of providing impunity for Israel.

The family sent a formal letter to Biden asking to meet with him during his trip.

US Secretary of State Anthony Blinken spoke with Abu Akleh’s family on the phone on Wednesday and invited them for a meeting in Washington. (Int’l News Desk)

Share
Previous ‘Super Moon’ lights up night skies around world
Next Traces of humans from 48,000 years ago found in Kazakhstan