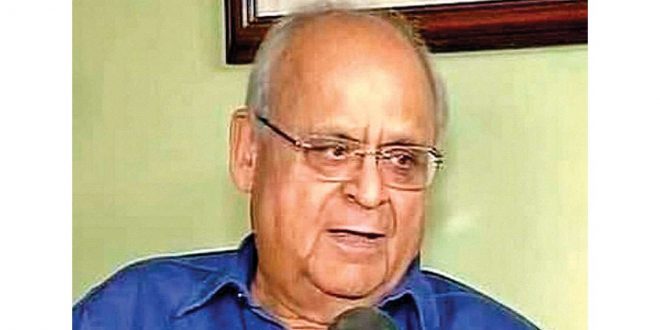 I
Hyderabad, Feb.17 (PMI): Former Head of  RAW  (Research and Analysis Wing), Vikram Sood addressed a Seminar on External Intelligence for National Security here in the city at Administrative Staff College of India(ASCI)  today. Also a book “The Unending Game” authored by him was unveiled and discussion on the same was held.
These events saw houseful audience and overwhelming response due to Phulwara Terror Attack. Well over 700 people from different walks of life heard him speak various aspects of the Indian Intelligence Bureau—RAW. It was organised by Social Cause, a city based not for profit organisation. ‘We organise similar Seminars to create awareness among the public  on subjects of great concern to them’,  informed Dr. Somayaji Susheela, President of Social Cause.
Addressing the gathering  after the book was unveiled, Vikram Sood said RAW is an organisation of honour and it does what  it is asked to do. ‘We are known for our failures. We don’t mind for that. We don’t take it seriously’, he said. He said  how technology overpowering us. The word privacy is loosing its meaning because of the power social media wield and have access to public data.  Technology is growing so also threats. Intelligence plays a major role. America has Intelligence budge double the size of the Indian Defence budget, he told his audience.
Terror groups are openly using Social Media tools like WhatsApp and Telegram so openly and securely, end to end. And it free, reliable, 24×7, you can speak and text. You and your data are now product to Facebook and you are no longer consumer to them as they use this data and shared with American Intelligence. US predicts by 2030 technology will impact our Security in a  major way. Artificial Intelligence, Drone Survilance, IoT, Block Chain Technology will change,  Vijram Sood informed
It is US’s manifest that they rule the world, informed Vikram Sood. Biggest War in future,  if at all  will be held, it will be held for water, he stated.
China is going to be the biggest threat for us. Vikram Sood predicted that there would not be any peace talks in future. PAK doesn’t want them. They want us to be down and out.
He gave his idea of reforms. Despite technological Intelligence, human intelligence can not be undermined Vikram opined. We need new skill sets. He cited an example of how USA uses services of 45000 people for translation services.
The secret recipe for the success Vikram said will be the combination of diplomacy, Intelligence, Military Power, Economic Power, Technological Intelligence and Human Intelligence
Replying to question on Media role, he told media to refrain from highlighting terrorist attacks, showing gruesome pictures. Such things will terrorise people and that is what terrorists wanted, he told. Greater the coverage, adverse its impact. Media has to be careful. Had media not blown out of proportion of Khandhahar hijack, there wouldn’t have been so much pressure on government to release Maulana Masood Azhar, the man India freed after the 1999 IC-814 hijack, is now said to be behind Pulwama terror attack. American media refrains from showing such pictures, he reminded the media.
Earlier giving his opening remarks, K Padmanabhaiah, who chaired the meeting said, there should be a national policy on Kashmir. Pak has one. And that one is to bleed India through 1000 cuts till they die. So keep on  waging proxy war.
Lt Gen K. Ramchandra Rao who spoke said future wars will be fought on virtual space and over internet and social media.(press media of india)