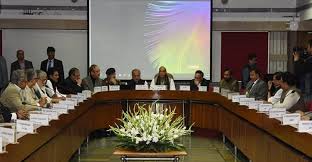 The all-party meeting convened in New Delhi today in the wake of the Pulwama terror attack passed a resolution strongly condemning the dastardly act which claimed the lives of 40 CRPF jawans.

All parties condemned terrorism in all its forms and the support being given to it from across the border.

The resolution said terrorism in India is being actively encouraged by the forces across the border and India has displayed both firmness and resilience in dealing with these challenges.

The meeting was chaired by Home Minister Rajnath Singh. He briefed the parties about the attack and the steps being taken by the government in this regard.

Briefing media later, Union Minister Narendra Singh Tomar said all parties expressed their support to the government in its fight against terrorism.

He said Home Minister Rajnath Singh stated that government is committed to free Jammu and Kashmir of terror and violence.

The Home Minister said during the meeting that the government has adopted the policy of zero tolerance towards terrorism from the very beginning.

Talking to media, senior Congress leader Ghulam Nabi Azad, said they stand with the government for unity and security of the nation and security forces.

He said Congress party gives its full support to the government in the fight against terrorism, be it Kashmir or any other part of the nation. He said the entire nation is in mourning today and is angry.

Post Views: 298
Share
Previous PM Modi reiterates that sacrifices of security personnel in Pulwama attack will not go waste
Next Govt has given free hand to Security Forces to deal with terrorists: Rajnath Sing