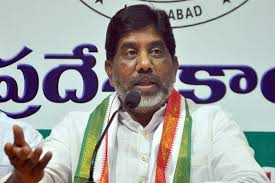 All-Opposition meeting to launch nationwide stir against defection of MLAs

Hyderabad, March 23 (PMI): Telangana CLP leader Mallu Bhatti Vikramarka today alleged that the State was witnessing anti-Constitutional rule with Chief Minister K Chandrashekhar Rao diluting the spirit and mandate of X schedule of the Constitution. He also alleged that Governor ESL Narasimhan, who was holding a constitutional post, was ignoring the illegal acts of the ruling TRS party.

Speaking at all-Opposition political parties’ meeting organized by the Congress here on Saturday, the CLP leader alleged that the money meant for development of the State by the TRS government was being used to “buy” legislator of Opposition parties. He also claimed that the tainted money gained from redesigning the irrigation projects was being used for “trapping” the Opposition MLAs. He further alleged that the Chief Minister was indulging in illegal and immoral acts.

The CLP leader cautioned that the entire State would turn into KCR estate if he was allowed to rule as a dictator. He clarified that they have convened the all-Opposition parties’ meeting to save democracy from the clutches of the authoritarian Chief Minister. The CLP leader said they have decided to launch a nationwide agitation for introduction of an anti-defection law.

Speaking on the occasion, Telangana TDP president L Ramana said that KCR, who had once called upon the people to physically attack those who were defect to rival parties, was himself encouraging defections after coming to power. Ramana alleged that the Chief Minister has miserably failed to achieve even a single promise enshrined in the AP Reorganization Act despite having majority number of MPs.  Wondering as to what the TRS would do now even if it got 16 MPs, Ramana said there was a need to hold a nationwide discussion on the menace of defections and the TDP would extend all support for the cause.

Telangana Jana Samithi (TJS) president M  Kodandaram said as there was an internal crisis in the ruling party, the TRS was encouraging defections from the Opposition parties to overcome the problem. He felt that such malady of defections would lead to political instability in the State.

CPI State secretary Chada Venkat Reddy alleged that Chief Minister K Chandrashekhar Rao was turning the “Veera Telangana” into “Rotten Telangana” He also alleged that KCR was ruling the State with feudal mentality and poached their lone MLA during his first term as they didn’t extend support to MLC candidate fielded by the TRS party.  He also said KCR, who had promised to make a Dalit leader as chief minister of the State, KCR was not even allowing a Dalit leader to continue as a CLP leader, he bemoaned.

Balladeer Gaddar said the Chief Minister alleged that KCR did not want the Opposition at all in the State. He also made it clear that it will be impossible to form any kind of government at the Center without the support of either the Congress or the BJP. He also wondered as to how KCR would rule the country by winning just 16 MPs. Later, Gaddar entertained the meeting by singing a folk song on Chief Minister KCR. TPCC working president Kusuma Kumar was also present. (PMI)