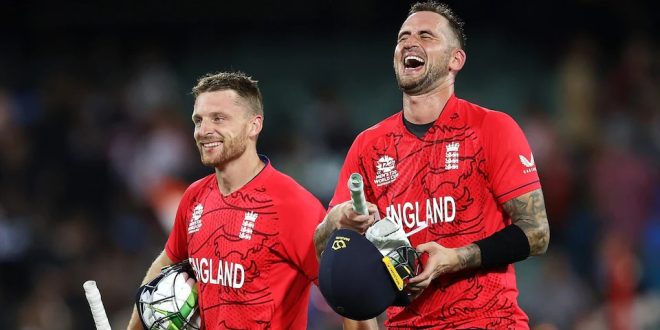 SYDNEY: England, Jos Buttler was adamant, had yet to play their perfect game in the 2022 T20 World Cup. As he locked in embrace with Alex Hales after this 10-wicket victory over India’s galacticos, Buttler might have been minded to revise his opinion; he will just hope it has not come one game too soon. 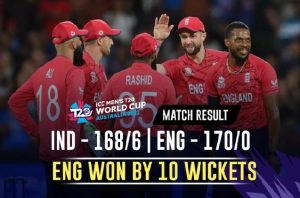 All day long the streets in Adelaide were pregnant with expectation. The throngs of Indian supporters did see the effervescent performance that they craved only, it came from England. As the crowd were silenced by an evisceration for their home-town favourites in the World Cup semi-final, it did not seem outlandish to see shades of Germany’s 7-1 victory over Brazil in the 2014 Football World Cup semi-finals in England’s triumph in Adelaide.

A year to the day ago in Abu Dhabi, England failed to defend 166 to reach the World Cup final. Now, they were confronted with a chase of 169. But Buttler and Hales made India’s total look as puny as one of Adelaide’s fruit flies, reaching their target with 24 balls to spare. Long before the final throes of this game, India’s supporters had begun to leave this magnificent ground, their hopes of a Melbourne showdown with Pakistan dashed.

“We’re an incredibly dangerous side, huge confidence in the group, we haven’t at points played as well as we could do in the tournament yet still find ourselves in the semi-final of a World Cup and saved our best performance so far for today,” Buttler said. “We got off to a really great start, kept the pressure on them.”

Games of T20 can be maddeningly complex, hingeing on microscopic details. Not this time. The reason for England’s victory was simple: their overwhelming superiority across the two powerplays. 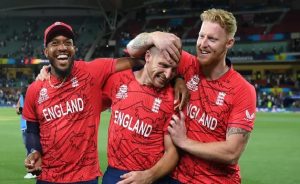 Despite a few dazzling shots from Rohit Sharma and Virat Kohli, India approached the powerplay as if they had just signed a non-aggression pact. By the end of the first six overs, India had reached 38-1: a start utterly in keeping with their batting approach, based on building up to a denouement.

England had designs on something altogether grander, resolving to exploit the opportunity offered by the limit of two fielders outside the 30-yard circle. It took England 3.2 overs to match India’s powerplay haul; by the time the six overs were up, England had soared to 63 for no wicket. This was a tussle between two profoundly contrasting T20 philosophies and vindication for England’s buccaneering approach.

This was clinical, calculated aggression targeting the short square boundaries emboldened by a batting line-up so deep that Chris Jordan was carded at number 10. It amounted to Exhibit A for England’s mantra that no batting is wasted, because the knowledge of the prowess to come liberates those at the crease to attack. “It was an incredibly long batting line-up which allows you to just keep going and play with so much freedom,” Buttler explained. 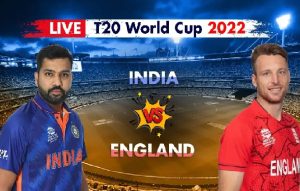 Hales crunched seven sixes; he briefly had designs on a century, only for Buttler to continue the plunder. India tried swing and seam; spin in and spin away; pace on and pace off. All the while, England continued apace, waltzing to the second-highest successful chase of the World Cup.

Naturally, Buttler sealed it with a six, lofting Mohammed Shami over long-on and then being engulfed by Hales, now just a game away from securing the World Cup medal that was nearly his in 2019. Buttler and Hales have now combined for three consecutive 50 stands in must-win games; this alliance was the highest partnership by any nation in T20 World Cup history. The debate about who should replace the injured Dawid Malan proved moot; Phil Salt did not even face a ball.

Jordan, the other addition to England’s XI, Mark Wood was ruled out with a right hip injury could be content with his return to the side. Figures of three for 43 are unflattering, but Jordan bowled three of the last five overs; in his solitary earlier over, he snared Rohit Sharma, who was becalmed in making 27 from 28 balls. Adil Rashid, player of 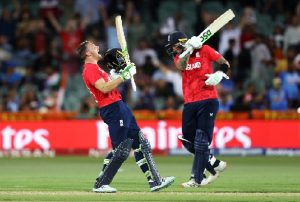 the match against Sri Lanka, was England’s standout bowler once again, yielding just 20 from his four overs and snaring Suryakumar Yadav, the top-ranked T20 batsman in the world, slicing a slow leg break. While Hardik Pandya’s final flourish, including what was best described as an upper cut for six over deep extra cover, was spectacular, England’s ambitions extended altogether greater than feasting at the death.

India’s 168 for six felt around par. England, who had chosen to chase Buttler said they “weren’t sure exactly what would be a good score”, and would have been aware of India’s comparative struggles when setting targets would soon put it in a completely different light.

England’s victory was all the more remarkable for coming with five first-choice players Bairstow, Malan, Jofra Archer, Mark Wood and Reece Topley all injured. For all the changes to England’s personnel this year, the continuities in ethos have been as important. A second World Cup victory of this age, following the ODI World Cup win in 2019, would strengthen England’s claims to being one of the greatest white-ball international sides of all time. 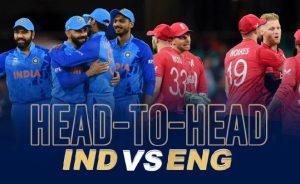 No men’s side has ever held the ODI and T20 World Cups simultaneously; win against Pakistan on Sunday, and England will become the first.

For India, defeat bore an uncomfortable resemblance to their 2016 World Cup semi-final against West Indies in Mumbai. Just like then, India batted first, built steadily and their innings essentially panned out exactly as envisaged. And, just like then, the realities of their total were exposed by an opponent that looked upon the notion of early batting caution with disdain. And so a curiosity continues: India’s only T20 World Cup crown came before the inception of the Indian Premier League.