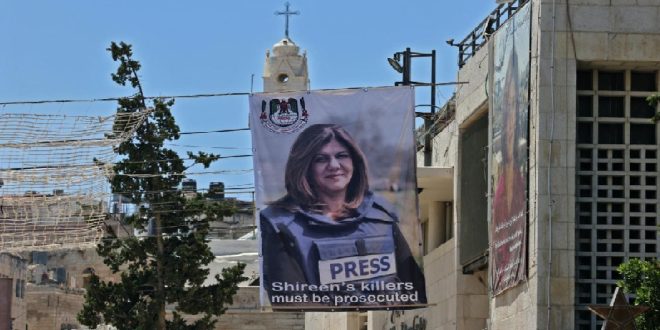 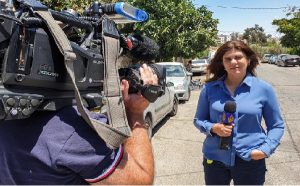 Abu Akleh, a television correspondent with Al Jazeera for 25 years, was killed by Israeli forces on May 11 as she was covering an Israeli military raid on a refugee camp in Jenin in the northern occupied West Bank.

The 51-year-old Jerusalem native and US citizen was a household name and a widely respected journalist who gave a voice to Palestinians through her coverage of the Israeli occupation.

The request includes a dossier on a comprehensive six-month investigation by Al Jazeera that gathers all available eyewitness evidence and video footage, as well as new material on the killing of Abu Akleh.

The request submitted to the ICC is presented “in the context of a wider attack on Al Jazeera, and journalists in Palestine”, said Rodney Dixon KC, a lawyer for Al Jazeera, referring to incidents such as the bombing of the network’s Gaza office on May 15, 2021.

“It’s not a single incident, it’s a killing that is part of a wider pattern that the prosecution should be investigating to identify those who are responsible for the killing, and to bring charges against them,” he said.

“The focus is on Shireen, and this particular killing, this outrageous killing but the evidence we submit looks at all of 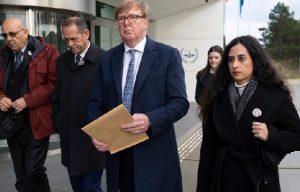 the acts against Al Jazeera because it has been targeted as an international media organization “and the evidence shows that what the (Israeli) authorities are trying to do is to shut it up,” Dixon said.

Al Jazeera hopes the ICC prosecutor “does actually start the investigation of this case” after the network’s request, Dixon said. The request complements the complaint submitted to the ICC by Abu Akleh’s family in September, supported by the Palestinian Press Syndicate and the International Federation of Journalists.

A new documentary by Al Jazeera’s Fault Lines shows how Abu Akleh and other journalists, wearing protective helmets and bulletproof vests clearly marked with the word “PRESS”, were walking down a road in view of Israeli forces when they came under fire.

Abu Akleh was shot in the head as she tried to shield herself by a carob tree. Al Jazeera producer Ali al-Samoudi was also shot in the shoulder.

The new evidence submitted by Al Jazeera shows “Shireen and her colleagues were directly fired at by the Israeli Occupation Forces (IOF)”, Al Jazeera Media Network said in a statement on Tuesday. 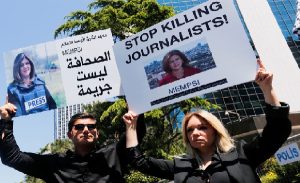 The statement added the evidence overturns claims by Israeli authorities that Shireen was killed in crossfire and it “confirms, without any doubt, that there was no firing in the area where Shireen was, other than the IOF shooting directly at her”.

“The evidence shows that this deliberate killing was part of a wider campaign to target and silence Al Jazeera,” the statement said.

Speaking outside the entrance of the ICC on the cloudy, brisk morning after Al Jazeera submitted its request, Lina Abu Akleh, who wore a badge with her aunt’s face, said the family was hopeful they would see “positive results soon”.

“We expect that the prosecutor will seek truth and justice and we expect that the court will deliver in holding institutions and individuals responsible of this crime accountable for killing my aunt,” she said.

“This is very important to us not only for Shireen, nothing can bring Shireen back but this will ensure that such crimes are stopped and hopefully the ICC will be able to take immediate action to put an end to this impunity.” 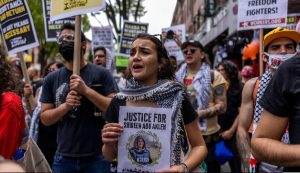 Walid al-Omari, the Al Jazeera bureau chief in Jerusalem and a friend and colleague of Abu Akleh, said it is critical to keep the case alive in public opinion. “We don’t think Israel should escape from accountability.”

Once the ICC has reviewed the evidence it will decide whether it will probe Abu Akleh’s killing as part of ongoing investigations.

In 2021, the ICC decided it has jurisdiction over the situation in the occupied Palestinian territory. Al Jazeera’s submission requests the killing of Abu Akleh become part of this wider investigation.

“We’re making a request for an investigation that leads to charges being brought and those responsible being prosecuted,” said Dixon.

Investigations carried out by the United Nations, Palestinian and Israeli human rights organizations, and international news outlets concluded that Abu Akleh was killed by an Israeli soldier. 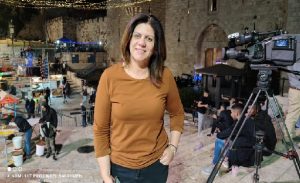 The Abu Akleh family has called for a “thorough, transparent investigation” by the US FBI and Department of State to reveal the chain of command that led to the death of a US citizen.

“In short, we would like [US President Joe] Biden to do in Shireen’s case what his and previous US administrations have failed to do when other American citizens were killed by Israel: Hold the killers accountable,” Lina Abu Akleh wrote in Al Jazeera in July.

In November the US announced an FBI probe into the killing of Abu Akleh, news welcomed by her family but, Dixon cautioned, this probe should not be a reason for the ICC not to act.

“They can they can work together with … the FBI, so that this case doesn’t fall between the cracks, and that those responsible are identified and put on trial.” 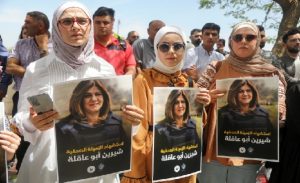 Israel initially falsely blamed armed Palestinians for Abu Akleh’s death, but in September said there was a “high probability” an Israeli soldier “accidentally hit” the journalist but that it would not launch a criminal investigation.

Hagai El-Ad, director of Israeli human rights organization B’Tselem, which swiftly debunked the false claim by Israel that a Palestinian gunman was responsible for Abu Akleh’s death, told Fault Lines: “They’re also very used to getting away with lying about killings of Palestinians both in the public arena and in the legal arena.”

“The reason why Al Jazeera made this request is because the Israeli authorities have done nothing to investigate the case. In fact, they’ve said that they will not investigate, that there’s no suspicion of a crime,” said Dixon.

“Al Jazeera reiterates its commitment to achieving justice for Shireen and to exploring all avenues to ensure that the perpetrators are held accountable and brought to justice,” said the network. (Al Jazeera)