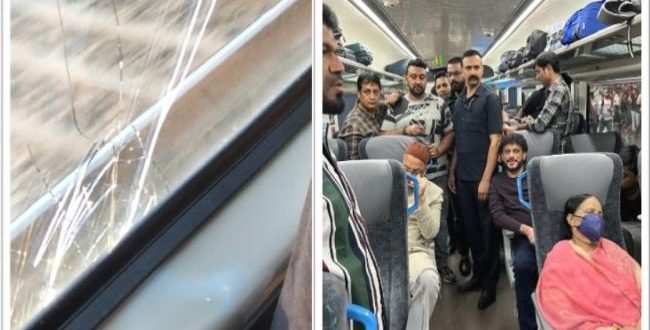 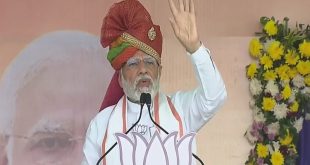 Ahmedabad’Nov 8’2022- AIMIM leader Waris Pathan said stones were hurled at Hyderabad MP and MIM chief Asaduddin Owaisi when he was travelling in a Vande Bharat train on Monday evening. Pathan said the MIM president was travelling from Ahmedabad to Surat. He said a stone was pelted at Owaisi to hurt him.

“This evening when we along with @asadowaisi sir, SabirKabliwala sahab and @aimim_national team were traveling in ‘Vande Bharat Express’ train from Ahmedabad to Surat, some unidentified people broke the glass by pelting stones on the train!,” MIM leader Pathan tweeted in Hindi.

Releasing a statement, Sumit Thakur, the spokesperson for Western Railways confirmed that a stone was pelted. He said there was “no damage on the inner side of the glass”.

“An incidence of stone hitting the Vande Bharat Express on its way to Mumbai on 7/11/2022 came to light. The incidence occurred between Ankleshwar and Bharuch section. There was a minor damage to the outer glass window of E-2 coach which has been attended and there’s is no damage on the inner side of glass,” the Western Railways statement said.

However, Gujarat Railway police have rejected the MIM leader’s claim that stone was thrown at Surat-bound Vande Bharat train to hurt Owaisi. Reports citing sources from the Railway department said that the stone had hit the window next to seat number E1-25, whereas Owaisi was sitting on E1-21.

Speaking to reporters, Deputy Superintendent of Police, DH Gaur said there is no residential area to suspect any hooliganism. He added Railways work is going on on the track between Ankleshwar and Surat. When Vande Bharat was moving towards the south, at the same time Paschim Express was moving towards the north, when due to vibration, a stone hit the window of the coach.