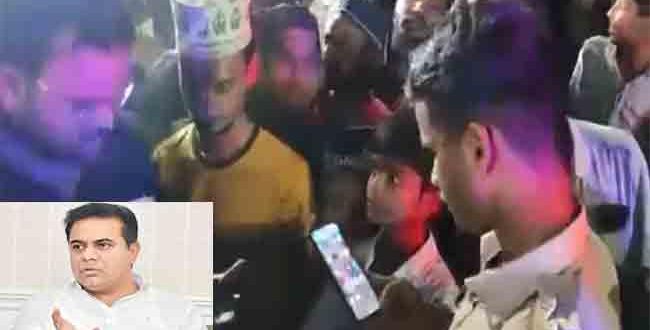 HYDERABAD:April 6- The All India Majlis-e-Ittehadul-Muslimeen (AIMIM) corporator Mohammed Ghouseuddin was arrested on Wednesday for allegedly using objectionable language against police personnel and threatening them, police said.
He allegedly behaved rudely with two police officials at the Bholakpur area in the early hours of Tuesday, when they asked to close shops that were still operating beyond the stipulated time.

A video of the same went viral on social media. Responding to the video Telangana IT Minister KT Rama Rao on Wednesday asked state Director General of Police (DGP) M Mahendar Reddy to take stern action against the corporator.

KTR tweeted: “Request@TelanganaDGP Garu to take stern action against the individuals who obstructed police officers on duty. No such nonsense should be tolerated in Telangana irrespective of political affiliations”.

Subsequently, the corporator was booked under Indian Penal Code Sections 353 (assault or criminal force to deter public servant from discharge of his duty) and 506 (criminal intimidation) and was arrested and taken to the Musheerabad Police Station said.