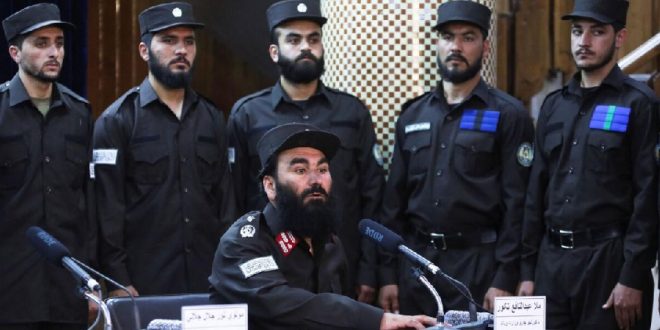 KABUL/ ISLAMABAD: Taliban authorities on Wednesday introduced new uniforms for its reconstituted Afghan police force, as the de facto government attempts to shift away from using its insurgent military forces to handle law and order. 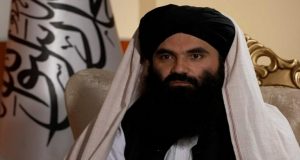 After the withdrawal of foreign forces ended a 20-year war last year, the Western-backed government and its security bodies collapsed in the face of Taliban military advances. World governments do not recognize the new Taliban set-up.

The interior ministry, led by Taliban officials, announced at a press conference that a new uniform had been designed for the police force.

The main changes, observed on the new uniforms worn by some officers at the briefing, were in terms of colour, now dark blue instead of lighter grey-blue, and the replacing of Afghanistan’s tri-coloured republican flag with the Taliban’s Islamic Emirate flag on the sleeve.

The Taliban does not recognise the traditional republican flag, used by the Western-backed governments that came to power after foreign forces toppled the Taliban government in 2001.

The Taliban had also used the Islamic Emirate flag white with black Arabic lettering displaying Islam’s main tenet when they ruled from 1996 to 2001. 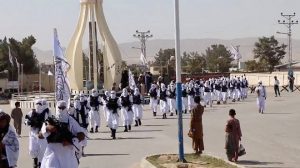 Acting Deputy Interior Minister Mawlawi Noor Jalal Jalali said a police force with new uniforms had been a top priority since taking over but did not give details on its size.

Interior ministry spokesman Abdul Nafi Takor said 20,000 uniforms were prepared under contract from a local company and 100,000 more would be made in the coming weeks.

The new uniformed police force will be used first in the provinces of Kabul and Kandahar.

The Taliban is looking to transition away from an insurgent force but has used its widely feared and largely untrained fighters to implement law and order after the previous police force disbanded with the fall of the government.

Jalali said over 50,000 personnel had undergone short training courses and 400 officers had graduated the long course.